By inviting author Joseph Boyden to participate in their Forward Thinking Speaker series, EPL proved they weren't afraid of controversy. By Janice Vis 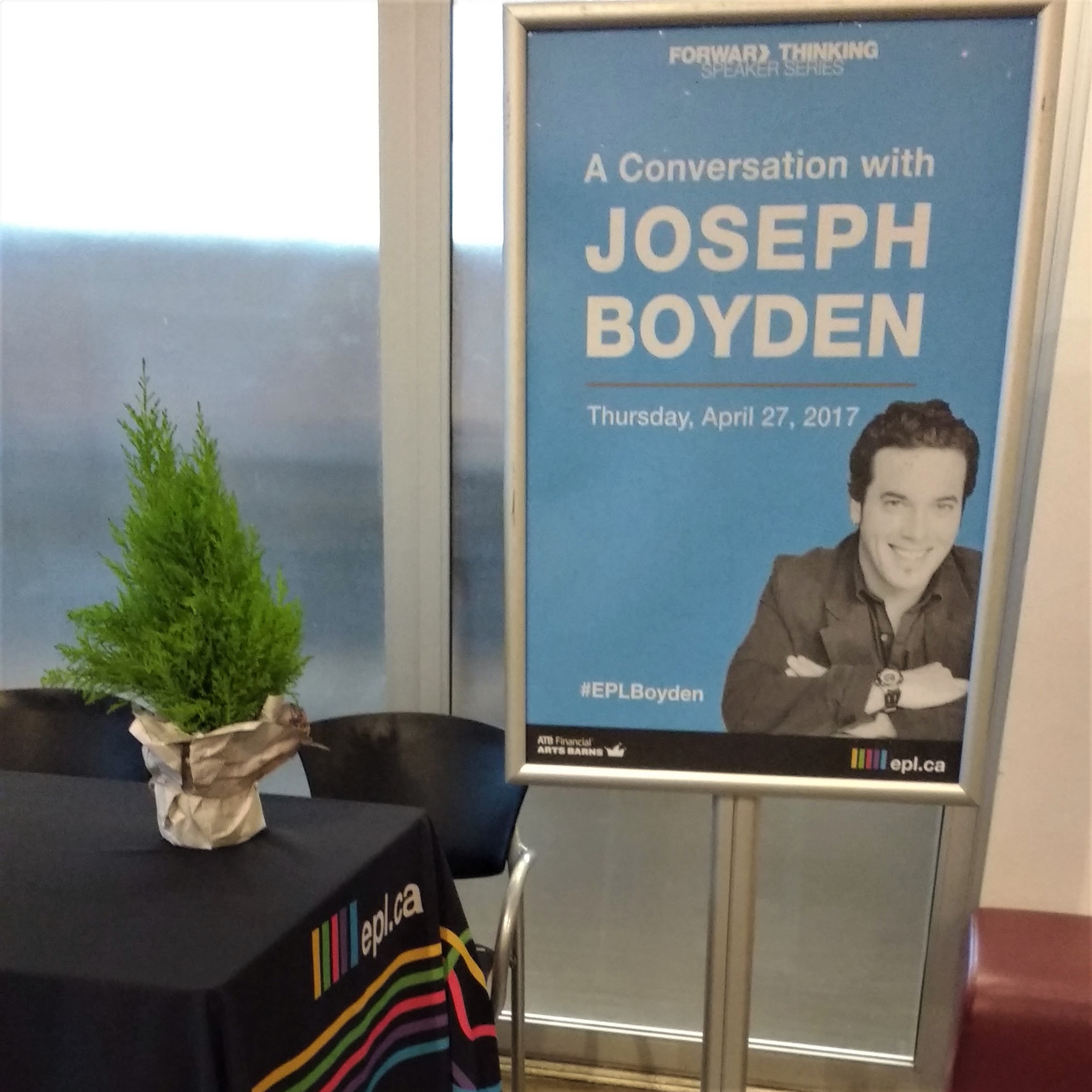 I had no idea what I was getting into when I registered for EPL’s Forward Thinking Speaker event, A Conversation With Joseph Boyden. I thought a few google searches would provide some basic background information; instead, I learned I was stepping into a controversy.

Joseph Boyden is a Canadian writer. His novels and short stories have received various awards, and The Orenda won Canada Reads 2014. Aboriginal concerns are often at the forefront of Boyden’s writing. For example, The Ordena features three narrators--two Aboriginals and a Jesuit missionary. However, in late December 2016, The Aboriginal People’s Television Network (APTN) published an article digging into Boyden’s claims to an Aboriginal ancestry, finding room for doubt and stating that there is no proof Boyden is Aboriginal.

The controversy has sparked debates across the internet: some label him as a liar making profit off of the identity of he had no claim to; others defend him, noting that “having no proof” of Aboriginal blood is not the same as proving he is not Aboriginal; others claim the debate of his ancestry is a flawed understanding of identity.

Since the controversial article was published, Boyden has been dropped from several speaking engagements, including Edmonton’s Winter Cities Shake-Up in February 2017. Some expected EPL to similarly deny Boyden the stage. In defense of their decision to continue with the event, EPL’s CEO, Pilar Martinez, spoke with CBC Radio. "We certainly recognize the sensitivities around this issue," she said. "There are people who condemn Boyden and there are others who support him. We have certainly consulted with our Indigenous relations advisor and other Indigenous communities," explained Martinez. “The library had no interest in silencing the author… We're bringing Joseph Boyden in as an internationally acclaimed Canadian author, not as an authority on Indigenous issues.” Martinez framed the issues around intellectual freedom and open discussion: “I think this is a great opportunity for our community to get together to listen to Joseph Boyden, to have a conversation."

I am certainly not qualified to provide any position on this topic or debate what constitutes Aboriginal identities. However, I was curious how EPL would handle this sensitive issue. Posters advertising the event were set up in branches across the city. How many people would show up? Would Aboriginal peoples support the event, or attend to ask him to tough questions? EPL’s website noted that his talk would include a discussion of “recent events.” How would he publicly address the APTN investigation when given the stage?

Tickets for the event were free but set up in a lottery format: months prior to the event, I signed up online, putting my name in the draw. In late March, I was informed that I had a ticket and needed to show up at the event before 6:50pm to ensure I had a seat. After that time, the general public would be admitted on a first-come-first-serve basis.

The event took place on April 27, 2017 at ATB Financial Barn. When I arrived at 6:40, EPL volunteers directed me through a crowd of people. It was much busier than I expected. Paperback copies of Boyden’s books were displayed and available for purchase at a nearby table, courtesy of Audrey’s Books. 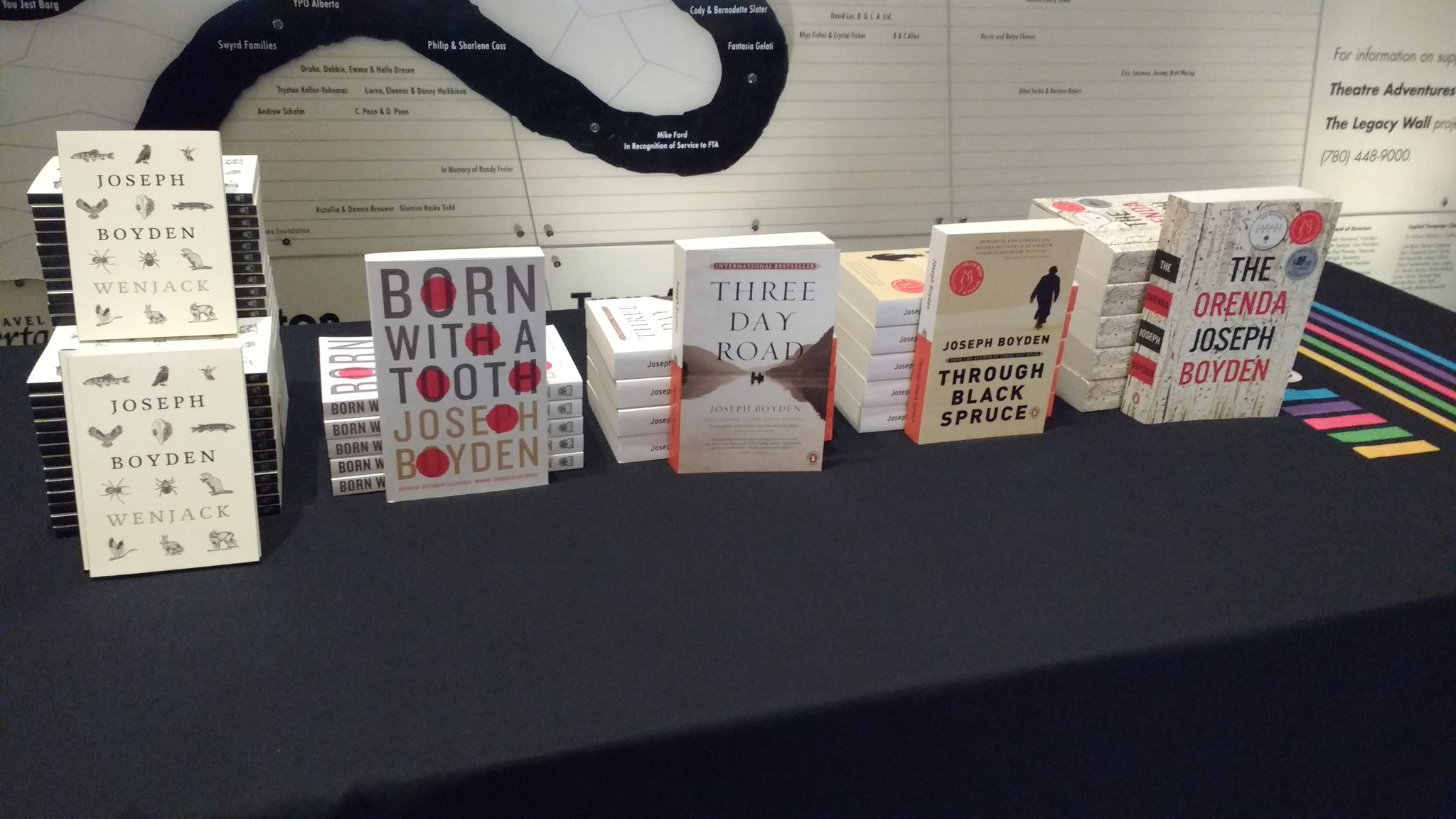 The auditorium was already nearly full. I was one of the younger people in the room which was mostly filled with middle-aged adults. A screen flashed on the stage, encouraging guests to tweet their thoughts with #EPLBoyden. The hashtag revealed Boyden had multiple supporters, eager to head him speak.

Martinez opened the event, repeating much of what she said in her interview with CBC: EPL was aware of the controversy, was sensitive to Aboriginal peoples, and was hoping that this event would bring about fruitful conversation. She then welcomed Elder Bearhead, EPL’s new Elder-in-Residence, to introduce Boyden.

Elder Bearhead drew the audience’s attention towards visiting Elders from Treaty Nine territory. This show of Indigenous presence illustrated EPL’s insistence that, despite the concerns regarding Boyden, they were still sensitive to Indigenous populations. Bearhead focused on the unity of peoples, proclaiming that “we must work together.” He also said a traditional prayer for the event, which seemed to resonate with many in attendance. In fact, one Twitter user said he “stole the show.” 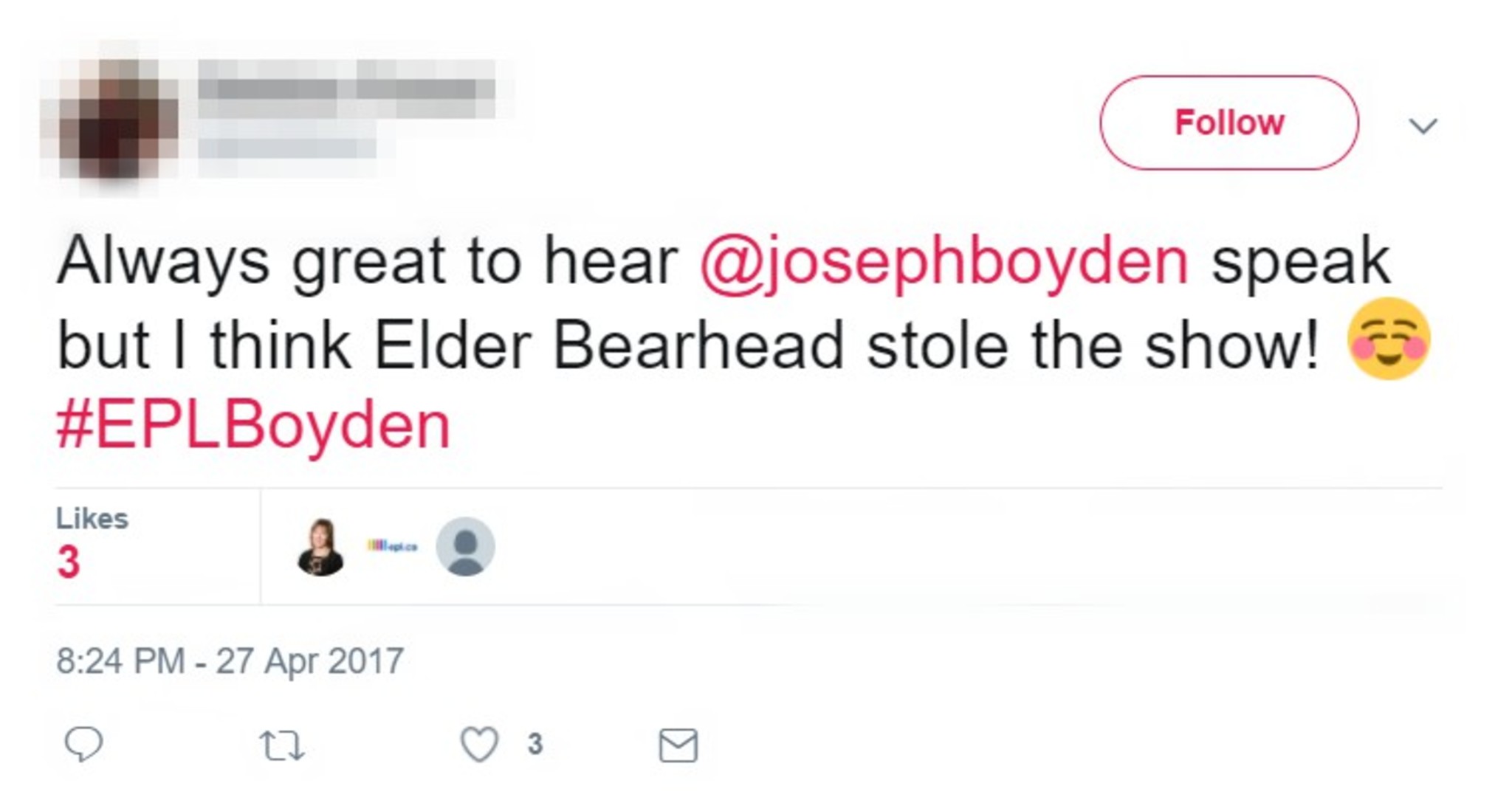 Boyden took the stage. He began by discussing his immediate family, describing the strength of his mother and older sisters. Throughout his talk, he came back to his family, crediting his background for the potent female voices in his work. He mentioned various friends, mentors, and teachers who helped shaped him and his writing. “I’ve been given so much,” he said, and explained that writing his stories was one way of giving back.

He also addressed the recurring doubts he experienced as a writer, and encouraged the audience to push through their anxieties and embrace their own creativity.

The bulk of Boyden’s talk was set up into three acts, each centered on a character from one of his novels, and included a short reading from the respective text. He spoke of his characters like real people, coming to him to be written into existence, and sometimes even rebelling against his own wishes.

For Boyden, the act of writing revolved around receiving inspiration rather than careful creation. He also revealed some of his own writing habits - he doesn't believe in editing-as-you-go, and instead encouraged writers to finish a draft before re-reading their narrative.

Boyden hadn’t directly addressed the controversy in his speech, but I expected it to come up when the audience was open for questions. I was, however, mistaken. Nobody asked Boyden about his heritage or demanded he defend himself against APTN’s accusations. In fact, multiple people encouraged him to keep writing in the face of resistance.

There were a couple questions which could have led Boyden into trouble, but he answered them carefully. When queried about Aboriginal issues and magnifying the Truth and Reconciliation act, Boyden answered by stressing the importance of listening to Indigenous peoples’ experiences. When asked about adopting different and potentially sensitive perspectives in writing, Boyden was measured, noting that while he actually encouraged writers to step into the shoes of another person, it was important to be be diligent and complete a lot of research.

He also highlighted the importance of face-to-face research rather than relying strictly on bookwork. He revealed he didn’t put a lot of faith into narrative theory, and preferred to write from inspiration rather than formula.

As the talk closed, it seemed that Martinez was completely correct: the event was about authorship, not identity.

The next day, I briefly surveyed Twitter for some response to the event. Most of those tweeting about Boyden were supportive, expressing excitement to see a favourite author. 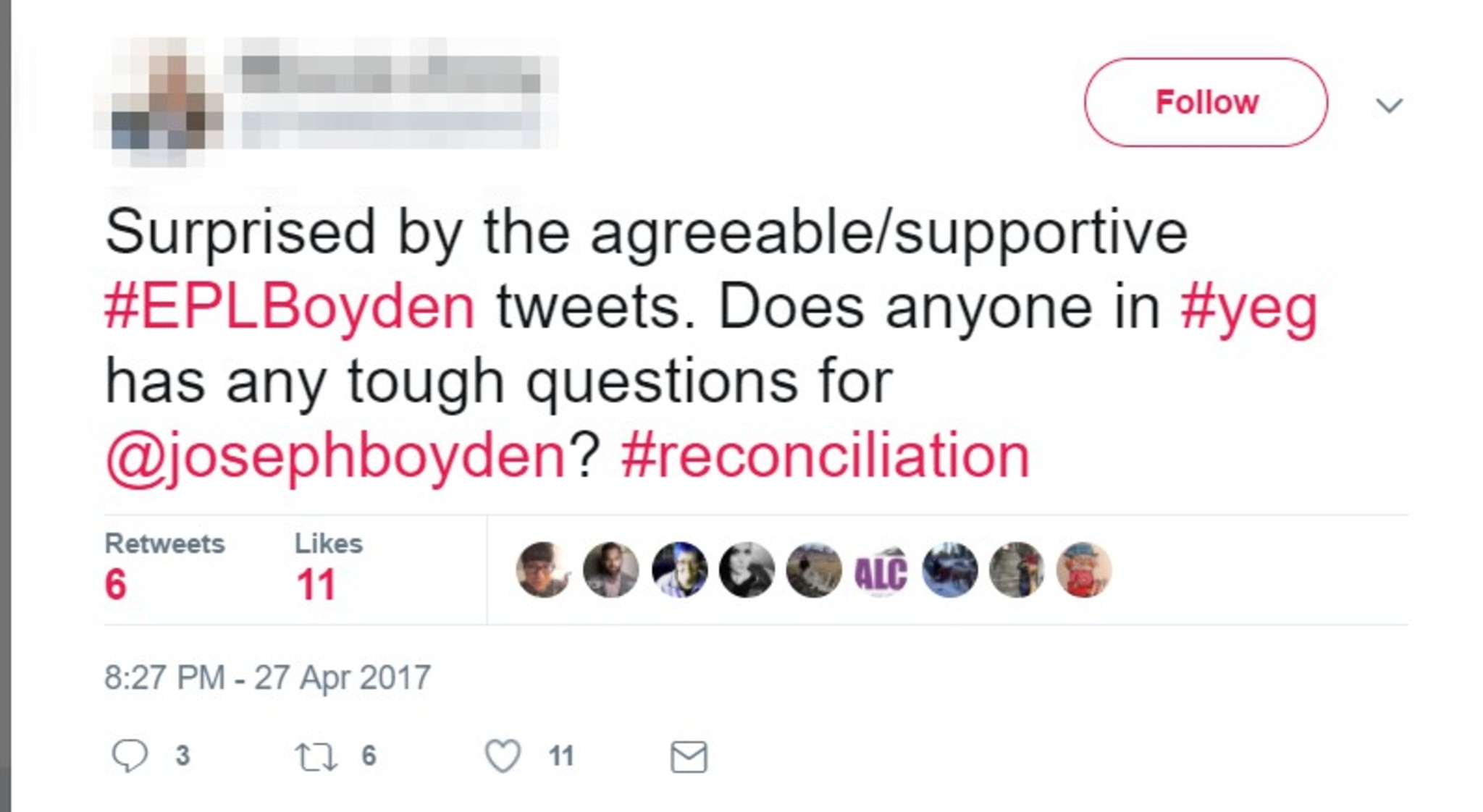 I was also sent an email after the event, inviting me to take part in a survey and comment on my experience. This included a variety of questions, wanting to know how I learned of the event, the quality of technical elements (for example, the audio), my opinions on the specific speech I attended, and speakers I’d like to see in the future.

This was a final place that anyone could have voiced their misgivings about Boyden. The survey also provides EPL with useful information--letting them know which channels of information are reaching the most people, what topics are connecting with locals, and what new events might cultivate interest.

A Conversation with Joseph Boyden wasn’t the controversy it could have been. I was surprised at the amiable nature of the event; I expected at least one person to challenge Boyden. It could be that those who were took offense boycotted the event. Perhaps the issue was already too far in the past to stir attention. Or perhaps my expectations were skewed by reading too many internet debates before attending.