How does one say farewell to a much-beloved library branch before it closes for renovations? A graffiti open house! EPL's fun-filled event gave visitors the opportunity to say their goodbyes to the location while enjoying a Saturday of entertainment. By Janice Vis 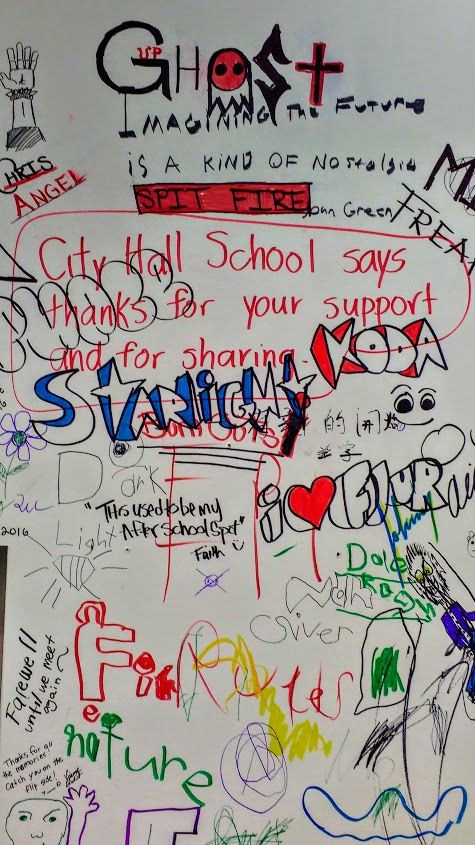 EPL's Stanley Milner Branch prepared to close for renovations by throwing a party--a graffiti party!--and inviting Edmontonians to draw on the library walls before construction teams entered. The event was held on December 17 from 10am to 6pm, and, according the EPL, attracted more than 4000 residents.

The entrance and a portion of the front room were taped off for the open house; the second floor and the remainder of the first were off-limits to the public. Volunteers armed with a nearly endless supply of sharpie pens (and a few paint pens) accommodated the crowd of aspiring artists. Official organizations, such as the Edmonton Police Force and City Council, opened the event by writing supportive messages on the walls, but soon the space was consumed with random scribbling which poured out onto the floor. Within hours, earlier messages were already buried under layers of new drawings. 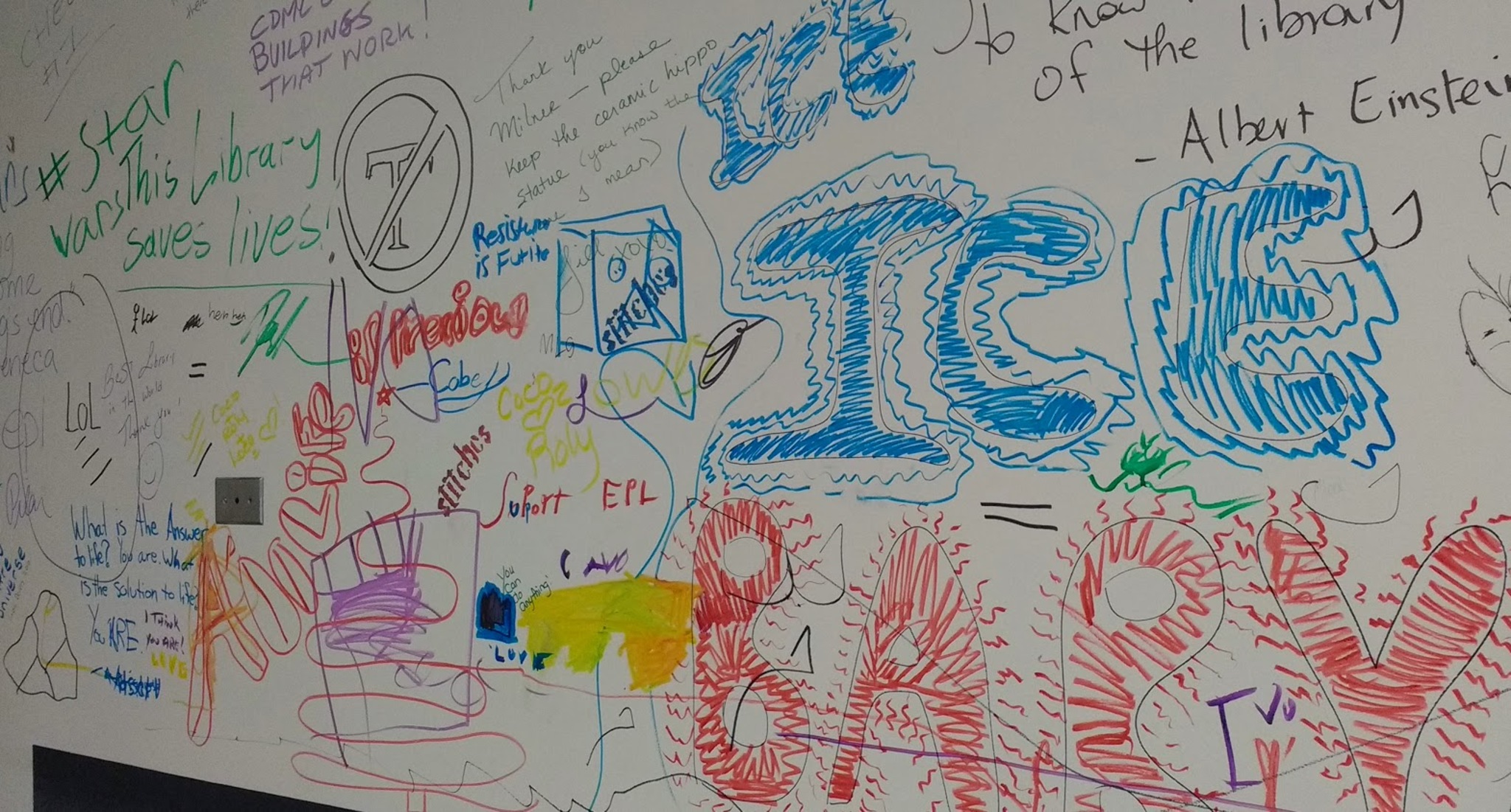 Most of the attendees were families with young children; the space was consumed with the nonstop sounds of small feet pattering on the floor and the shrill, delighted exclamations of youngsters, most on a sugar-high from too much free cake. Coffee was also offered free of charge, although the supply ran dry soon after the event opened. 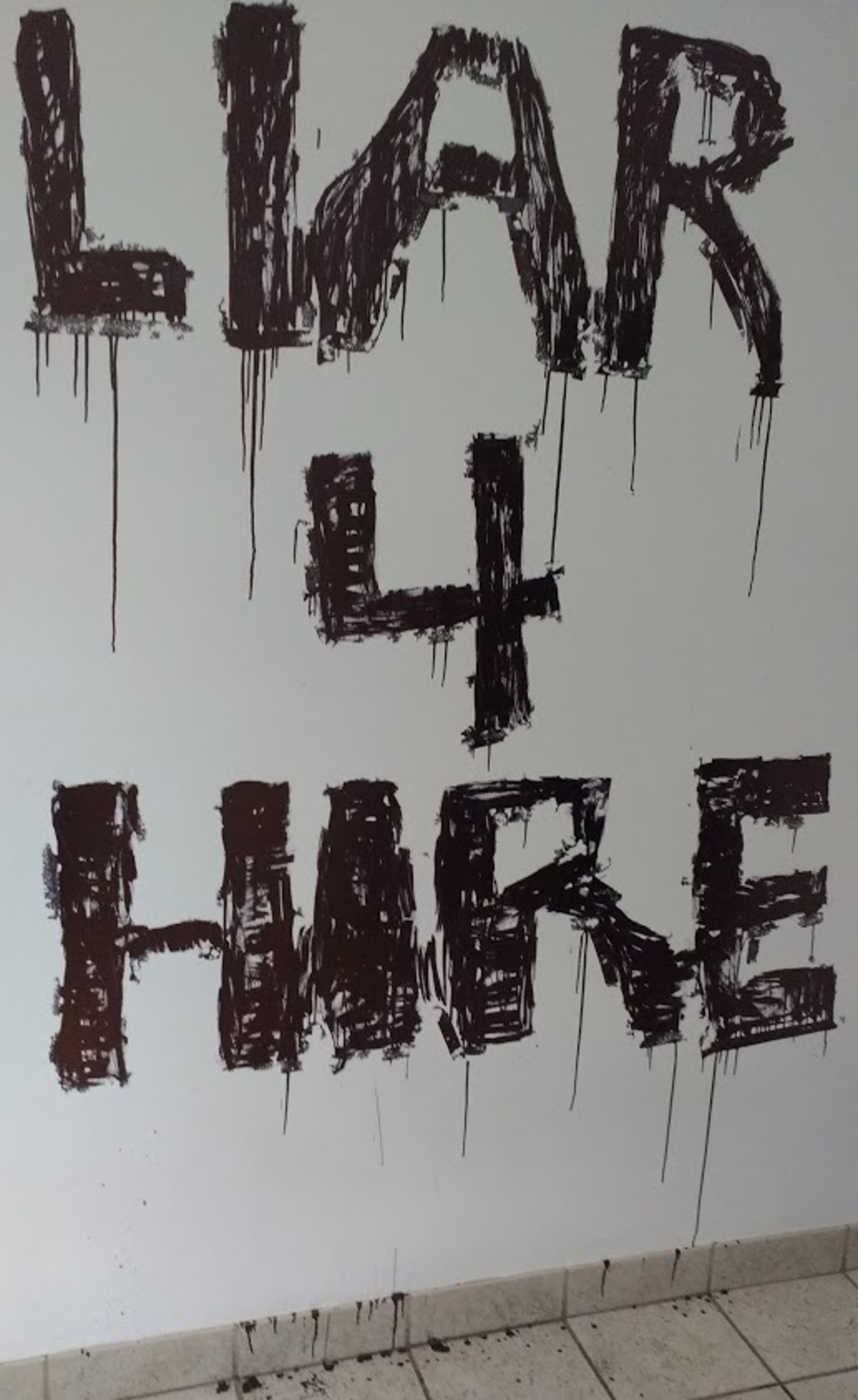 Some artistic types were also present, hoping to leave their own masterpieces on the library walls. A few brought their own supplies, favouring paint and chalk over the readily available sharpie pens. However, the crowds worked against them--several artists lamented they couldn't find enough space to realize their ambitions, and the rambunctious atmosphere hindered concentration.

For the majority of my visit, I was an observer, standing on the sidelines and taking pictures of braver artists. I was certainly not the only one; many adults opted to take pictures of their kids' work rather than pick up a pen themselves. Eventually I conceded to the allure of trespassing on social conventions. A smiling volunteer offered me a purple sharpie, and soon I was doodling a mosaic of flowers and butterflies across EPL's already colour-splattered walls. Perhaps due to my austere nature, it felt awkward at first, but soon I was hooked on the novelty of the artistic experience. Unfortunately, it was almost three o'clock by then, at there wasn't much space left to draw.

While there was no end to the creativity of the drawings and messages left by visitors, a few themes emerged. Fittingly, many choose to pay homage to their favourite book or author. 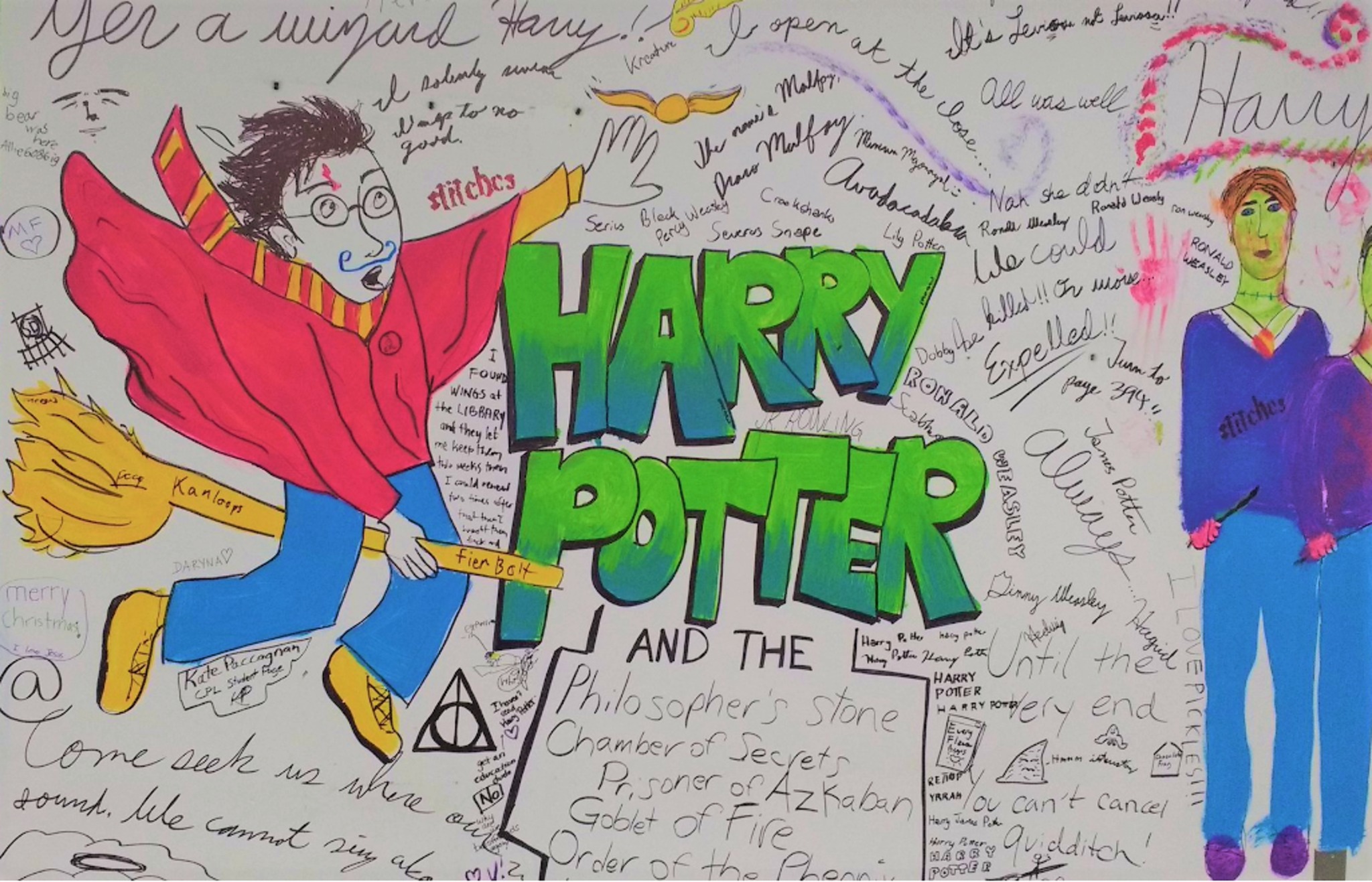 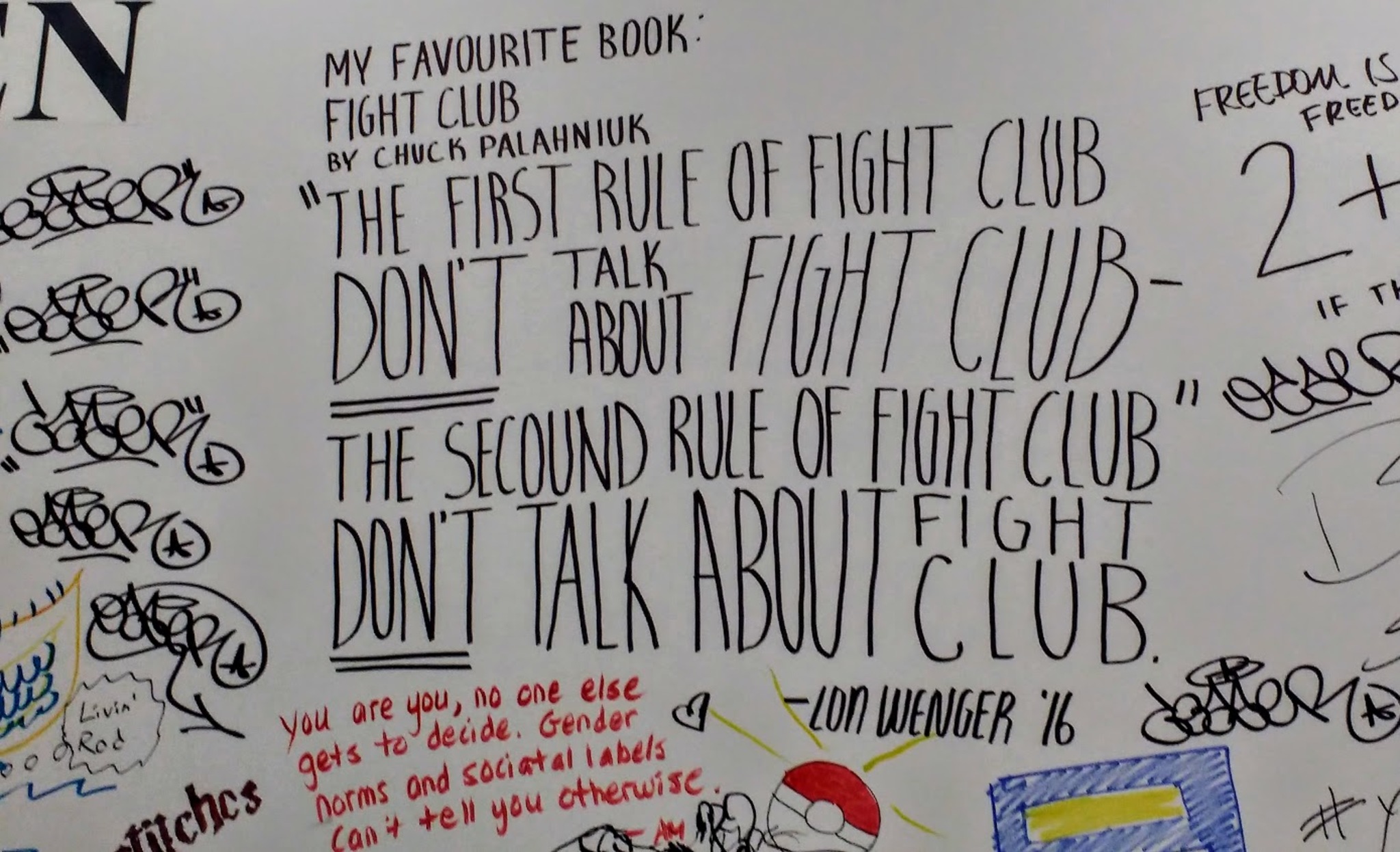 Others decided to turn political, addressing social issues or copying down quotes from politicians. 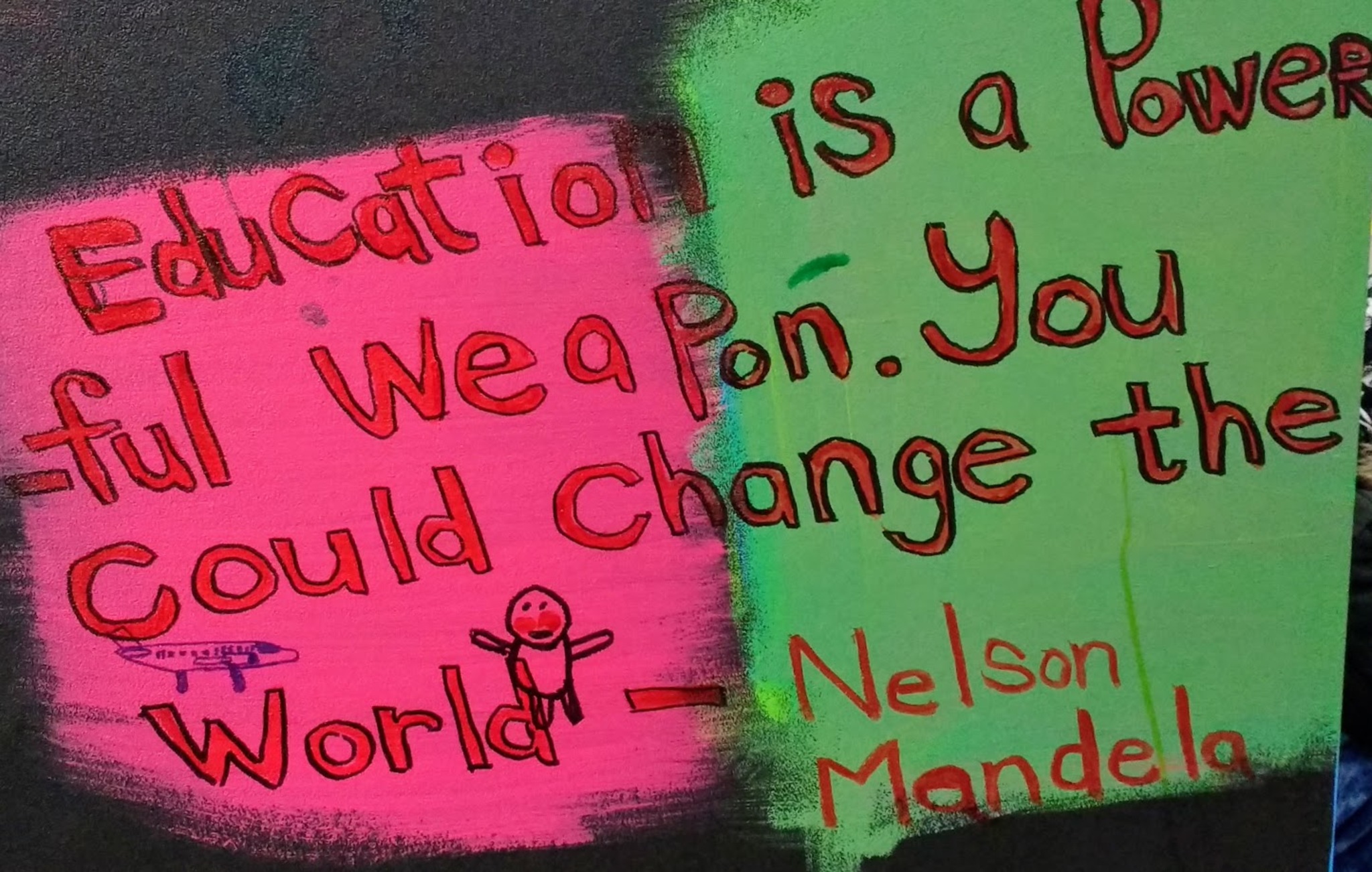 Some took advantage of the architectural details of the library, incorporating elevator buttons and floor tiles into their creations. 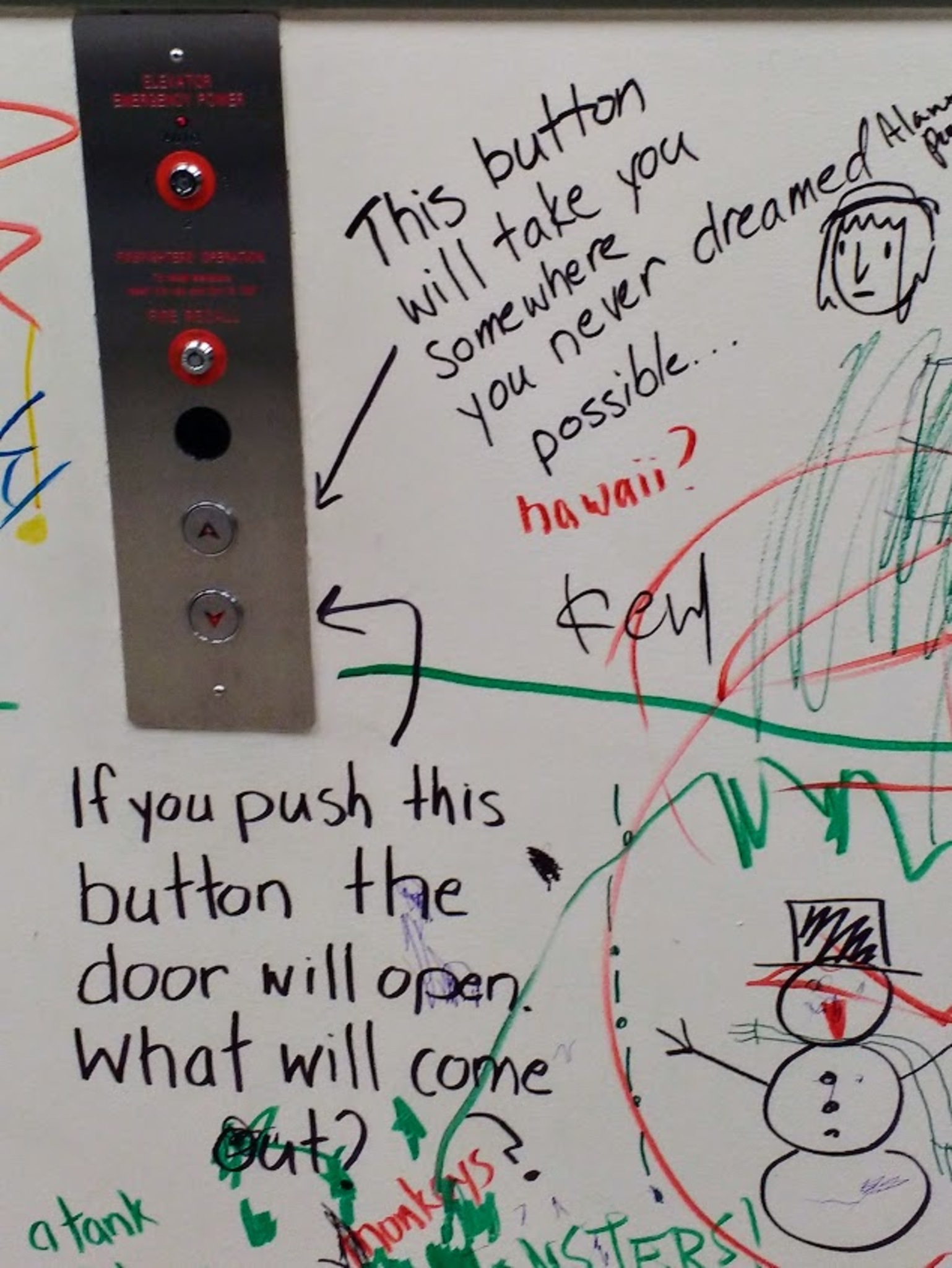 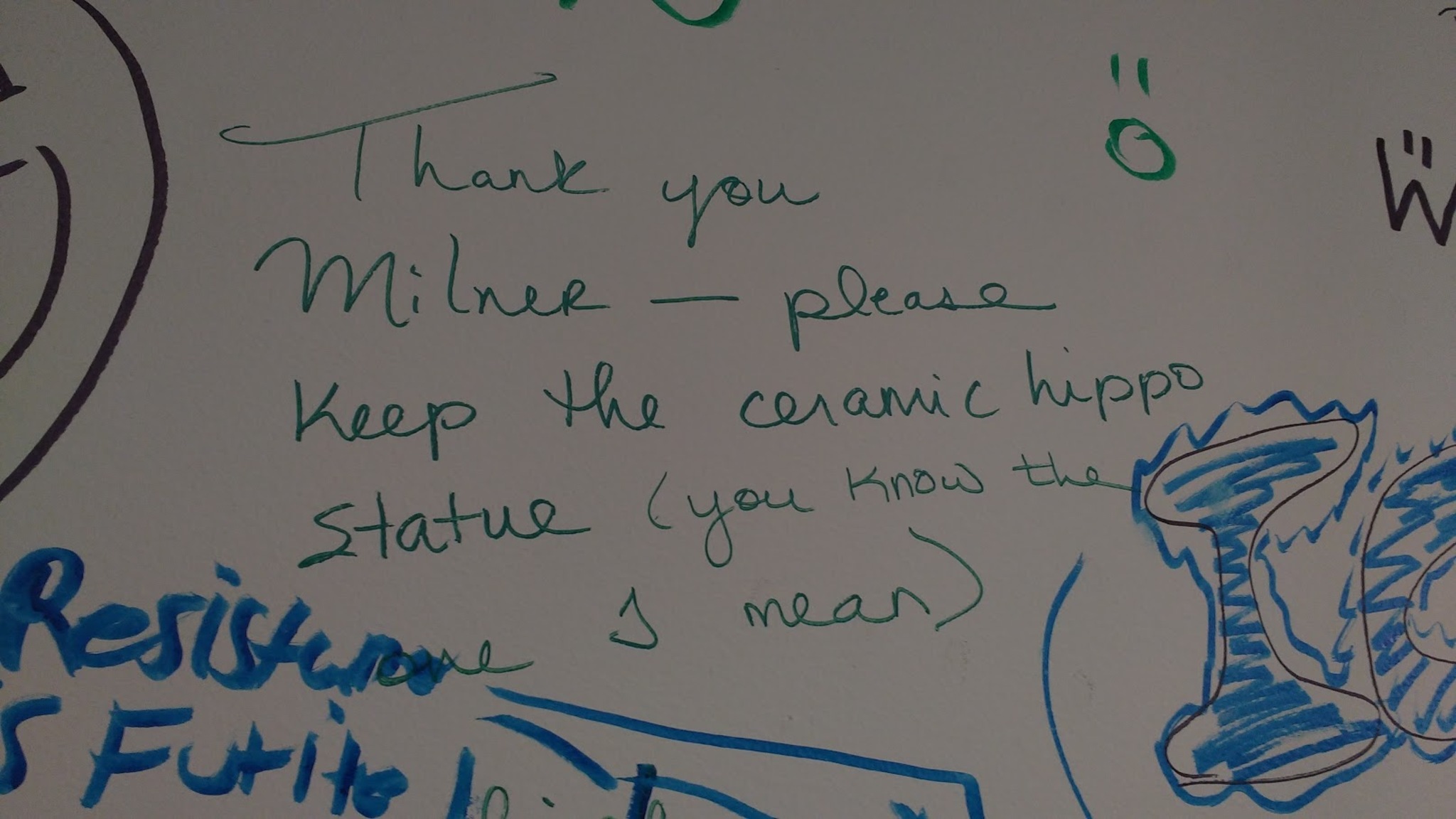 Finally, many visitors simply marked their presence by scrawling their name. 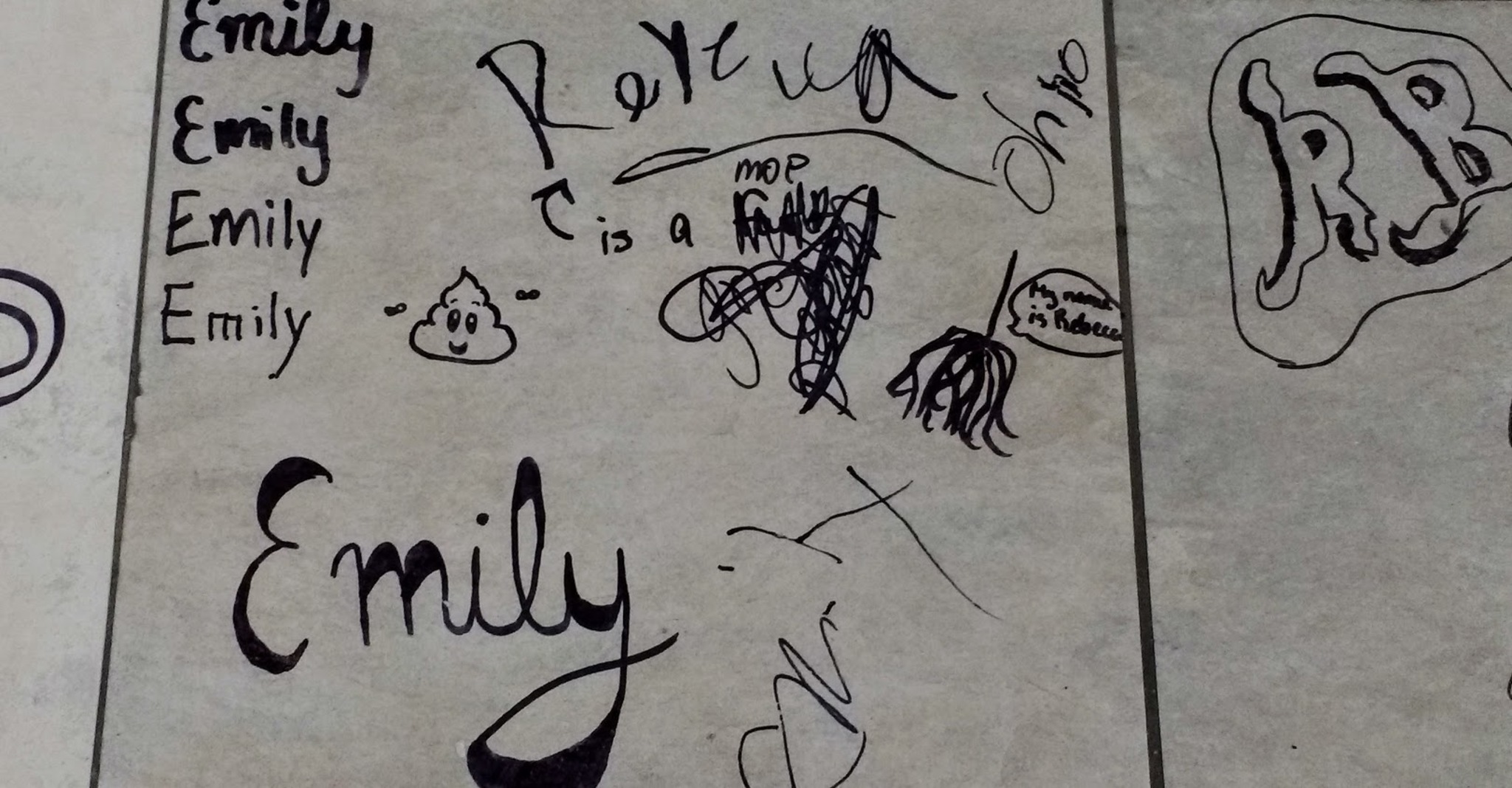 The library was well-patrolled with security, carefully watching the guests and the artistic work. These measures were evidently effective; the graffiti was G-rated. I didn't see a hint of vulgarity or inappropriate content, or even any negativity.

The graffiti was the main attraction, but not the only activity hosted at the event. There were also cardboard boxes available to make castles and forts; several children regularly raced into the jumbled towers to explore or hide from their friends. 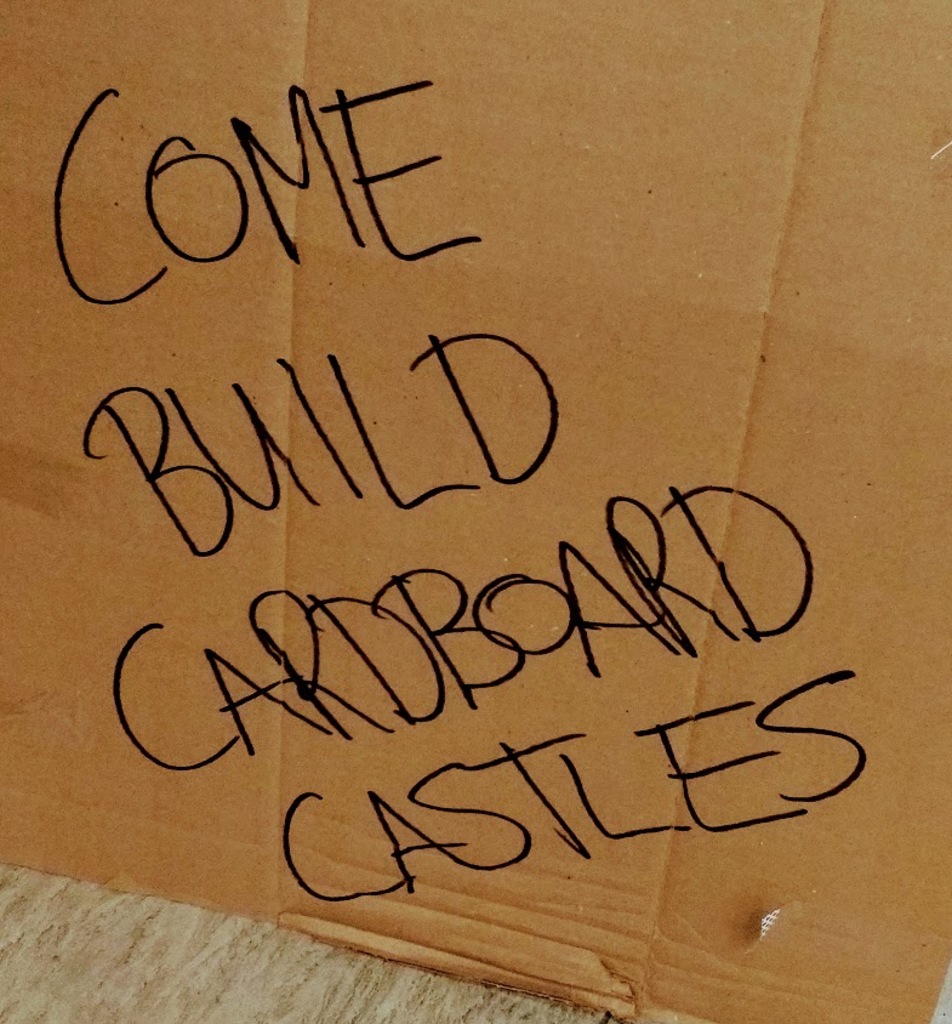 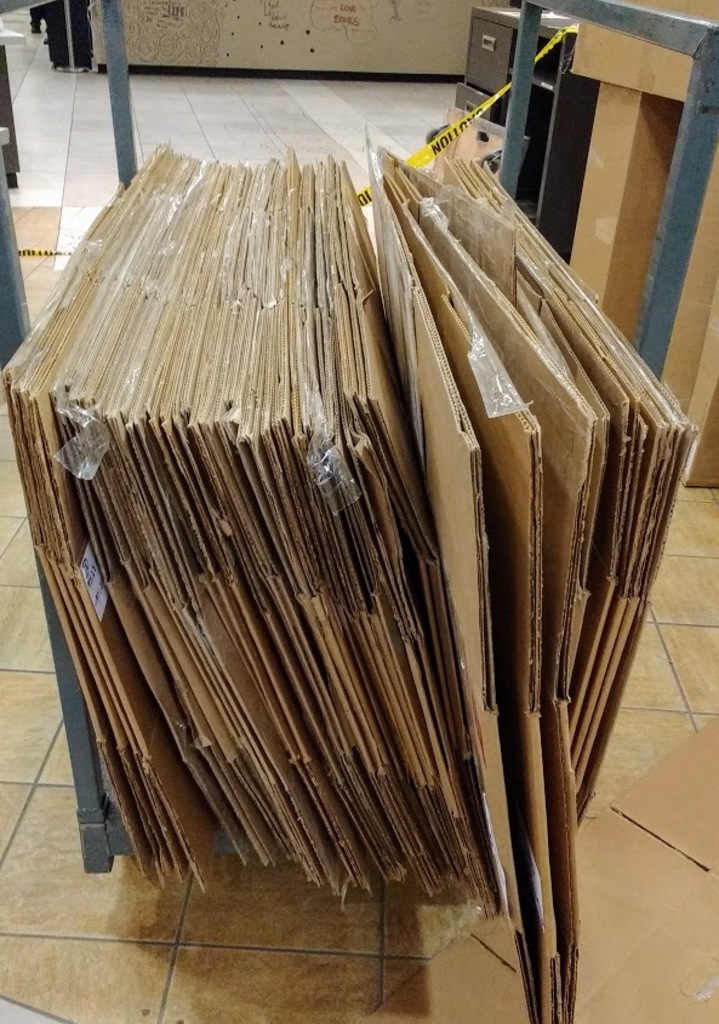 In keeping with their dedication to support local artists and the growth of the knowledge within the city, the event hosted performances by artists from Capital City records, adding to the lively atmosphere and providing exposure for Edmontonian musicians. There was also an opportunity for visitors to recall their personal memories of the library. Visitors could write down their thoughts, or they could record a thirty to sixty second clip reminiscing about the branch.

While offering free food, musical performances, and a Saturday of artistic expression, the library encouraged guests to donate to the upcoming renovations, supporting the new Stanley Milner branch set to open in 2020. However, while posters and a stack of forms provided the opportunity for financial contribution, there was no pressure for anyone to pull out their wallets.

The Stanley Milner branch revitalization is exciting for some, but leaves others nostalgic. Similarly, while the new library will be spacious and modern, the few intermediate years will leave guests accessing a smaller location in Enterprise Square. The Graffiti Open House was both an amusing and a clever event, allowing visitors to say goodbye to a beloved location and ushering in anticipation for the future of the downtown library.