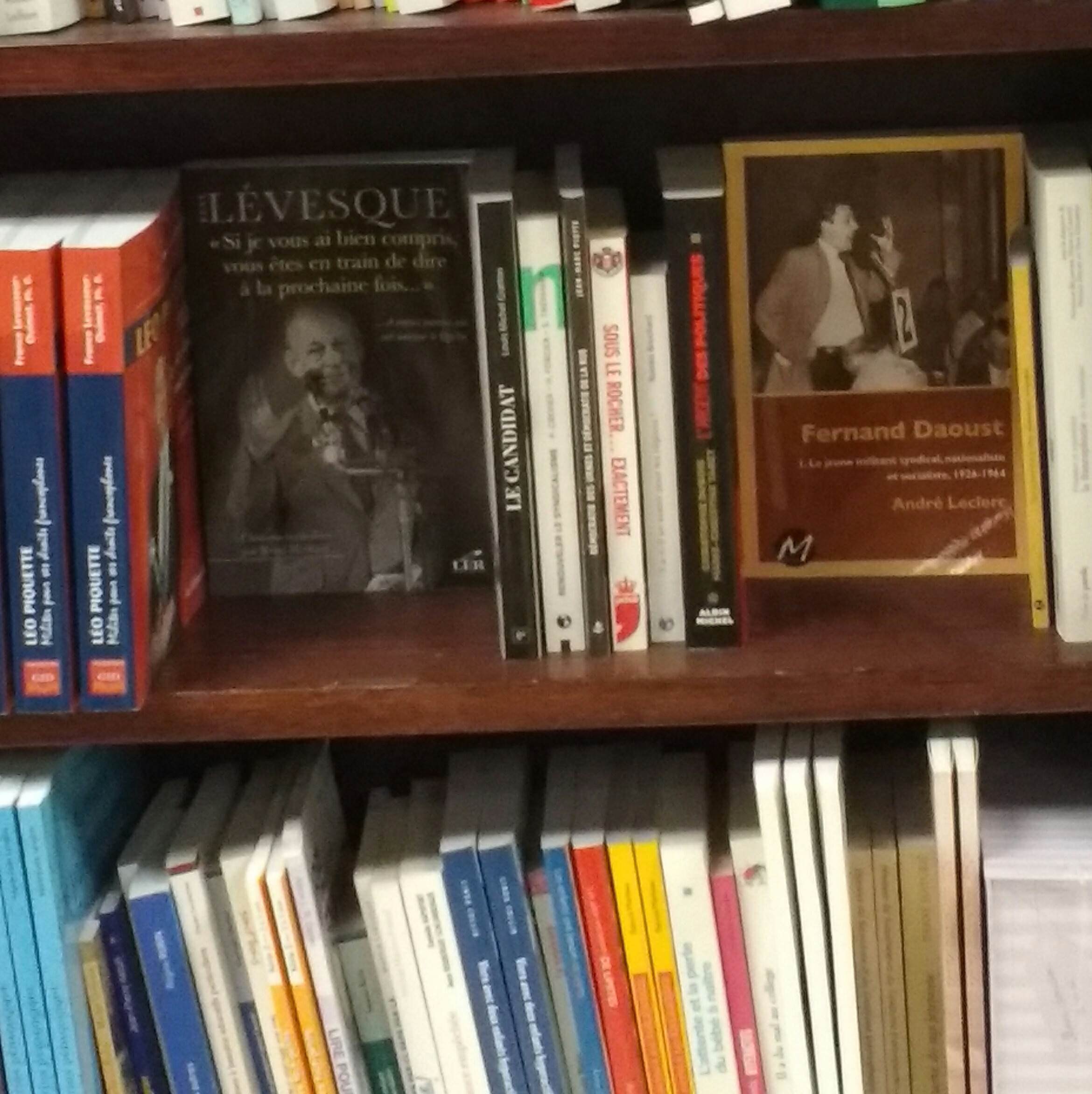 The first store I visited was the Coles located inside the Bonnie Doon Shopping Centre. The chain of Coles bookstores merged with SmithBooks in 1995 in order to form Chapters, before merging with Indigo in 2001 (“Our Company”). Coles is thus a subdivision of “the largest book retailer in Canada under the corporate name Indigo Books & Music Inc.” While this specific store is fairly small when compared to other locations, it is worth noting that the neighbourhood in which it is located--Bonnie Doon--is home to a considerable Francophone population, with 11.54% of homes in the area identifying French as a household language according to the city’s 2016 municipal census.

There are two bookshelves in the store dedicated to French-language books. These shelves are labelled ‘Livres en Français’, indicating that they are intended for capable French readers. The first shelf is dedicated to reading materials for younger readers, as evidenced by format and subject matter. It features cardboard books, thin illustrated books and pedagogical books meant for toddlers. There are also a few reference materials, such as dictionaries, in the middle of the shelf.

The second shelf features novels intended for slightly older readers, ranging from young-adult to adult novels. There are also non-fiction works at the bottom of the second shelf, including biographies and works discussing topics du jour. This creates a diversity appealing to a wide-ranging readership. There is also a diversity in terms of the materials’ origins: some books were originally published in English before being translated to French, whereas others were written in French. The books initially published in French also hail from various countries, notably France, Belgium and even Canada (Québec, more specifically). This section, constrained by limited space, seeks to provide a diversity of reading materials rather than to stock large quantities of the same book. Often, there is only one copy of each book on display (although it is possible that additional copies are kept in storage). One notable exception to this rule seems to be the French version of the ‘Diary of a Wimpy Kid’ series, with multiple copies of each volume in the series displayed on the shelves.

Then, I visited the Strathcona Chapters location. This particular store is much larger than the Bonnie Doon Coles location, spanning two storeys and housing a coffee shop. Although the available space suggests that it might stock a wider variety of reading materials--possibly in different languages, including French--it is also worth noting that the store is not located in a neighbourhood with a prominent Francophone population.

Upon examination, I discovered two separate French reading materials sections within the store. The first was labelled ‘French Language’ and consisted of a single shelf next to the ‘Other Languages’ section. As indicated by the fact that the section’s label was in English, this section does not include any literature or reading materials aimed at Francophones. Rather, it mainly includes tools for learning French, such as French dictionaries, pocket editions of French-English dictionaries, booklets of vocabulary exercises, a ‘French Grammar’ entry in the ‘Dummies’ series, and Sudoku vocabulary exercises. While most of these resources can be of some use to native or fluent French speakers (‘Le Bescherelle’, for example, is an essential reference tool in Francophone schools), they seem to be primarily directed toward individuals who are just acquiring basic written and oral language skills. This section thus focuses on the practical and well-defined aim of learning a language, and the reading materials it offers are consequently functional and pragmatic.

The second French section is within the children’s area of the store. It consists of three shelves, and books are organized according to age groups. These age groups range from a 0-2 category up to a 12+ category. Furthermore, the books within each category are arranged by type of book: notably, pedagogical books, novels, and series. This section mostly features popular titles translated from English, including novels and graphic novels. This suggests that Francophone children in Anglophone environments are exposed to the same culture as their Anglophone peers, and that they can transcend language barriers by accessing it in their own language.

Until recently, there had been a French bookstore named le Carrefour in Bonnie Doon, which was acquired by the University of Alberta in 2008 (“Librairie Le Carrefour to Begin Next Chapter”). During the summer of 2015, the store underwent major changes, opening an online store, relocating parts of its inventory, notably textbooks, to a location at the University of Alberta’s Campus Saint-Jean, and setting up other parts of its inventory within the university’s main bookstore (“La Librairie Le Carrefour S'installe”). Thus, the Student Union Building’s University of Alberta Bookstore contains a French section which consists of books that used to be stocked and sold at le Carrefour, an exclusively French-language bookstore.

The section includes nine bookshelves, which are all labeled in French. The first bookshelf contains an assortment of French dictionaries and reference materials. The second shelf holds books concerning topics relevant to the humanities and sciences, such as history, biographies, politics, social sciences, pedagogy, and even parenting. Next, the third, fourth and fifth bookshelves are dedicated to novels meant for older readers. These novels include French titles, as well as titles originally published in other languages. The sixth shelf is dedicated to arts and letters and aggregates books pertaining to architecture, music, poetry, drama, philosophy and translations of manga and graphic novels, in addition to bandes-dessinées. The seventh and eighth shelves are for works concerning hobbies, such as cooking, Sudoku and other puzzles, travel, as well as books on the topic of well-being. Finally, the ninth shelf is for books on the subject of spirituality. There is thus a great variety of titles, covering a broad range of topics. Furthermore, despite the fact that books translated from English are available in this section, many of these titles were originally published in French, and nearly all of them cater to a Francophone or French-speaking audience. It is also worth noting that the great majority of the French books available at this location are intended for older readers, with the exception of graphic novels.

While both the Bonnie Doon Coles and the Strathcona Chapters are part of the same chain of stores, there is a remarkable difference in their French-language reading materials inventory. The Bonnie Doon location caters to Francophone readers of all ages despite having limited stock, whereas the Strathcona location responds solely to the reading demands of Francophone children and individuals who are learning to read, write and speak in French. This suggests that Indigo Books & Music Inc. does not stock its stores in a completely uniform and identical fashion, and responds to the contexts and needs of particular communities. The University of Alberta Bookstore, much like the Strathcona Chapters, is not located within a Francophone community, but its considerable French-language inventory can be explained by the fact that it was previously kept in an exclusively French-language store located in Bonnie Doon.

Another interesting aspect of the reading materials available is the range of age groups to which each store caters. In the Bonnie Doon Coles, approximately three-quarters of the shelf space dedicated to French-language books is used to display books intended for readers under the age of fifteen. Furthermore, the French-language sections in the Strathcona Chapters cater almost exclusively to this age range. The University of Alberta Bookstore’s selection, by contrast, barely includes any books meant for children or younger readers.

In a report based on the 2006 federal census, it was established that Alberta’s Francophone population is demographically older than the provincial average, with a median age of 44, as opposed to the province’s overall median age of 36 (Floch and Abou-Rjeil 3). Thus, the variety of reading materials does not necessarily represent the demographics of communities, but rather the individuals within that community for whom books are purchased. The university bookstore’s lack of children’s literature reflects the fact that it is mostly frequented by students, who are often too old to choose children’s books, and typically do not have children of their own for whom they would purchase such books. Finally, both reading materials originally published in French and reading materials translated from other languages were available at each of the three stores I visited. However, there was a noticeably larger proportion of books originally published in French available at both the Bonnie Doon Coles and the University of Alberta Bookstore. This suggests that these retailers have a certain knowledge of Francophone culture and literature, and are not simply ordering French-language translations of books that sell well among Anglophone customers.

In conclusion, the three primarily Anglophone bookstores which I visited all carry French-language reading materials, although careful observation allowed me to note that the selection of books differed considerably from one location to the next. Indeed, the variety of books available seems to be affected by the linguistic demographics of the area in which the store is located, by the age groups of the customers who visit and purchase books from each store, as well as by the degree of familiarity which the staff has towards Francophone literature.

FUN FACT #1: While I was at the Strathcona Chapters, which has a very limited selection of French-language reading materials, Heather’s hand-picked, artisanal playlist was gently echoing over the store’s system, and one of the songs was in French.

FUN FACT #2: This report originally contained a tirade directed towards Heather, but she is allegedly a real person with a considerable amount of influence, and I do not want to have my Plum Points™ revoked.