The Pride Centre of Edmonton, a community-based resource centre for Edmonton's LGBT community, is home to its own lending library. By Samantha Fitzner 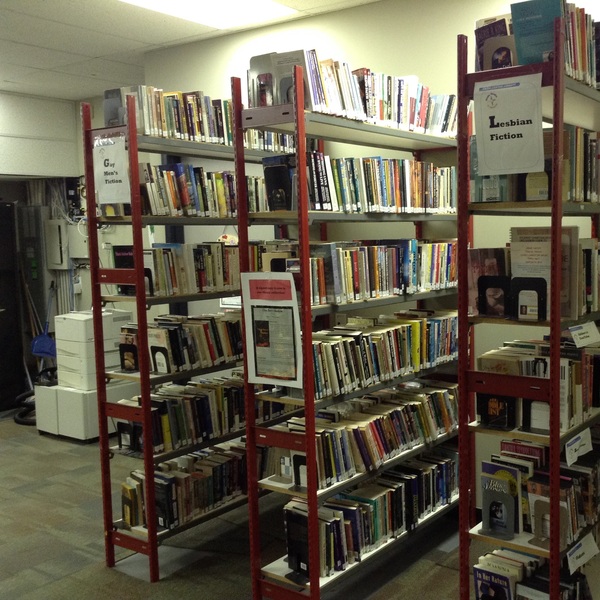 The Pride Centre of Edmonton, located near Grant MacEwan University, is an interesting point of research because of its broad selection of materials regarding LGBTQ issues and extensive lending library.

The Pride Centre is a small building with two main rooms. The larger is in the back, dominated by the library holdings sorted among general paraphernalia relating to other programming in the centre. All kinds of materials are included in the collection: DVDs, magazines, periodicals, fiction, and nonfiction volumes. All of the library contents either deal directly with LGBTQ topics or are written/created by LGTBQ individuals--books by TImothy Findley and David Sedaris are examples of the latter. From small press books that look handmade to a book called Hot Spanish for Guys and Girls--a phrase book of queer pickup lines for travelling, which one of the staff members tells me is his favourite--the collection has something for everyone. 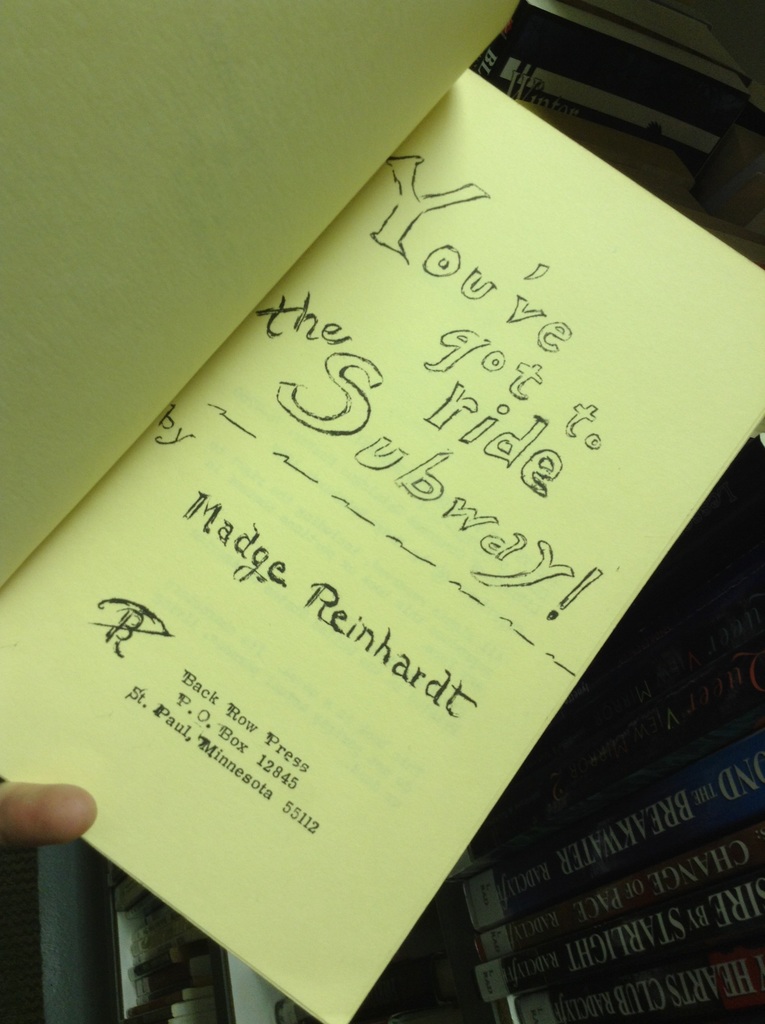 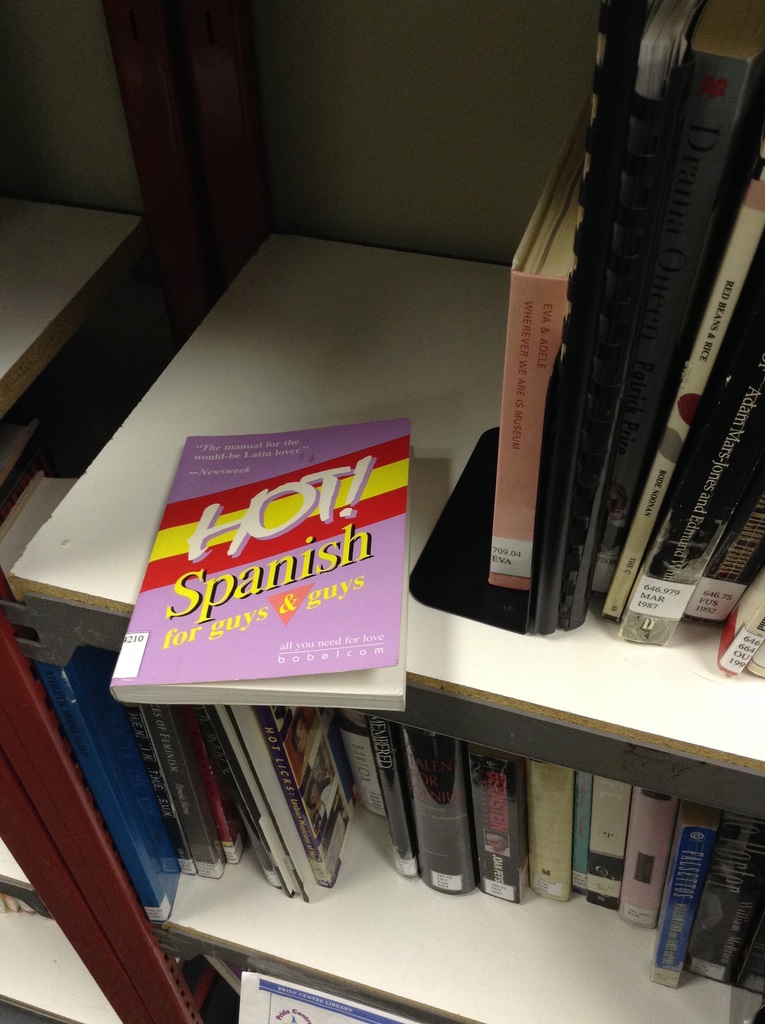 Though the library is relatively unassuming, I am told by a staff member that it is the second largest LGBTQ collection in Western Canada, and the fourth largest in the country. The centre owns more than 4000 texts, all meticulously cataloged by subject or genre and labelled with call numbers. The room hosts the entire collection, minus a few special volumes that are brought out by request only in order to prevent theft. The centre once had a signed copy of one of RuPaul’s books that went missing. Impressively, considering its size, the library holdings were collected entirely through donation; the centre does not have a budget for purchasing books and instead relies on individual benefactors. The library has been operating out of the Pride Centre since 2005, as small piecemeal donations eventually warranted operating a library. The library receives quite a few donations these days, but often the materials are unrelated to LGBTQ topics, and so are left out to be taken for free by people who frequent the centre. 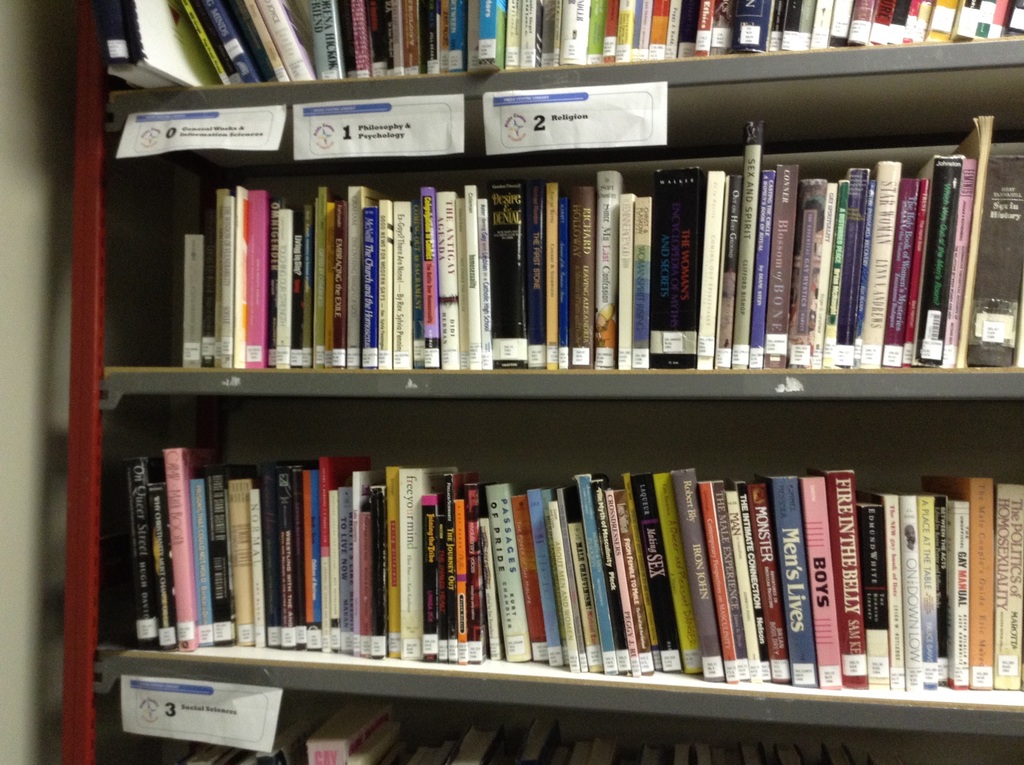 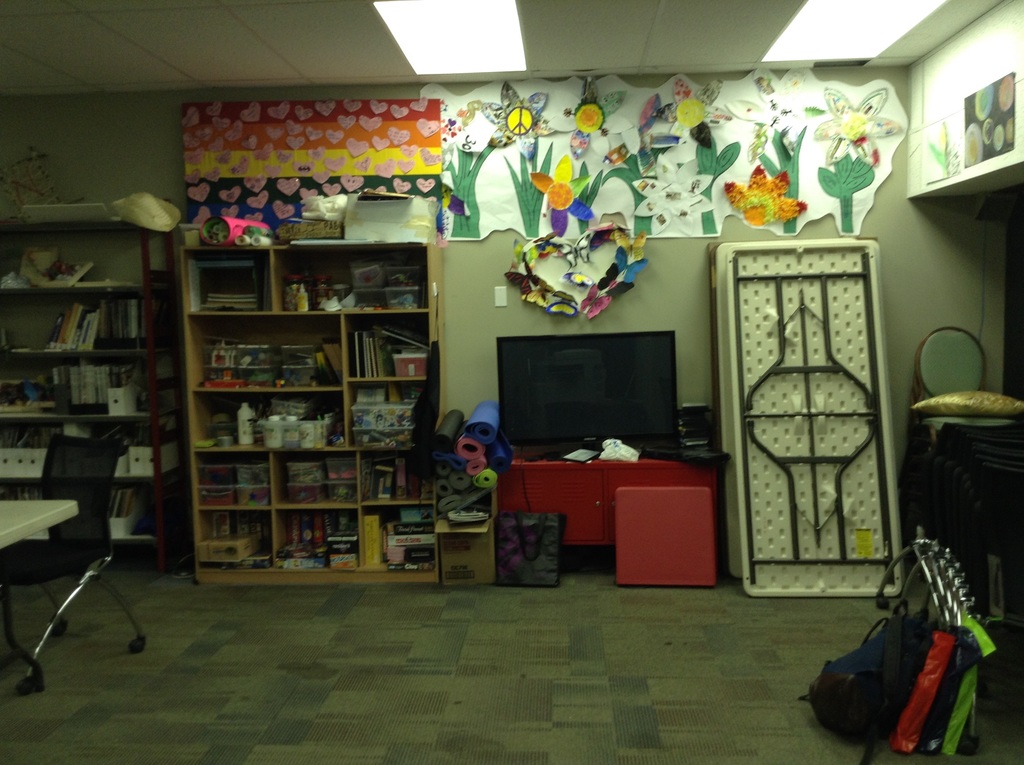 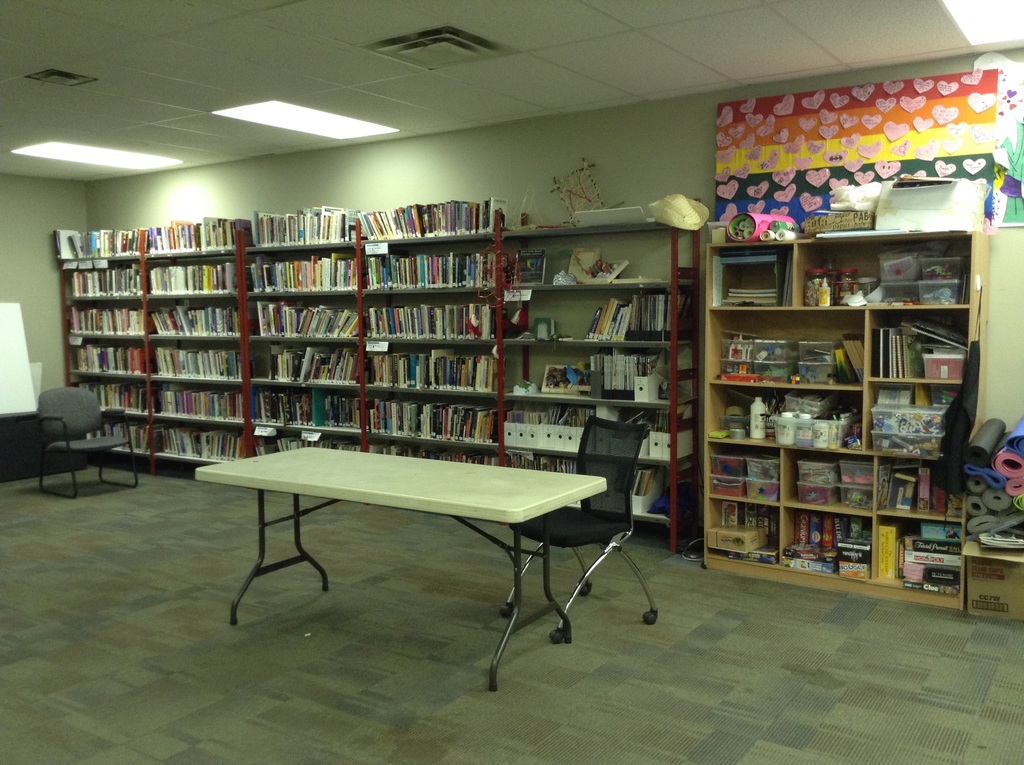 I am told that approximately ten people come in a week to borrow books, and twenty just to browse and read in the library space (although there is very little comfortable seating). These numbers reflect the summer months, which the centre’s slow season. When I visit the library during Friday evening drop-in hours, only one other person browses the shelves. Anyone can be a library member: it is a one time fee of twenty dollars (although this is waived for low-income individuals) and members can borrow up to five books for two weeks at a time.

The left side of the room is divided into Gay Fiction and Lesbian Fiction, the former half being slightly larger. This corresponds to what a staff member estimates is the general demographic of library users here: mainly gay men between 25 and 55, generally on the older side of the spectrum. Interestingly, of the half of the Pride Centre library that makes up its fiction section, a fifth is made up of mystery novels. Katherine V. Forrest, the most represented author in the collection, is a writer of lesbian detective novels. Genre fiction appears to be a popular choice in all reading communities. 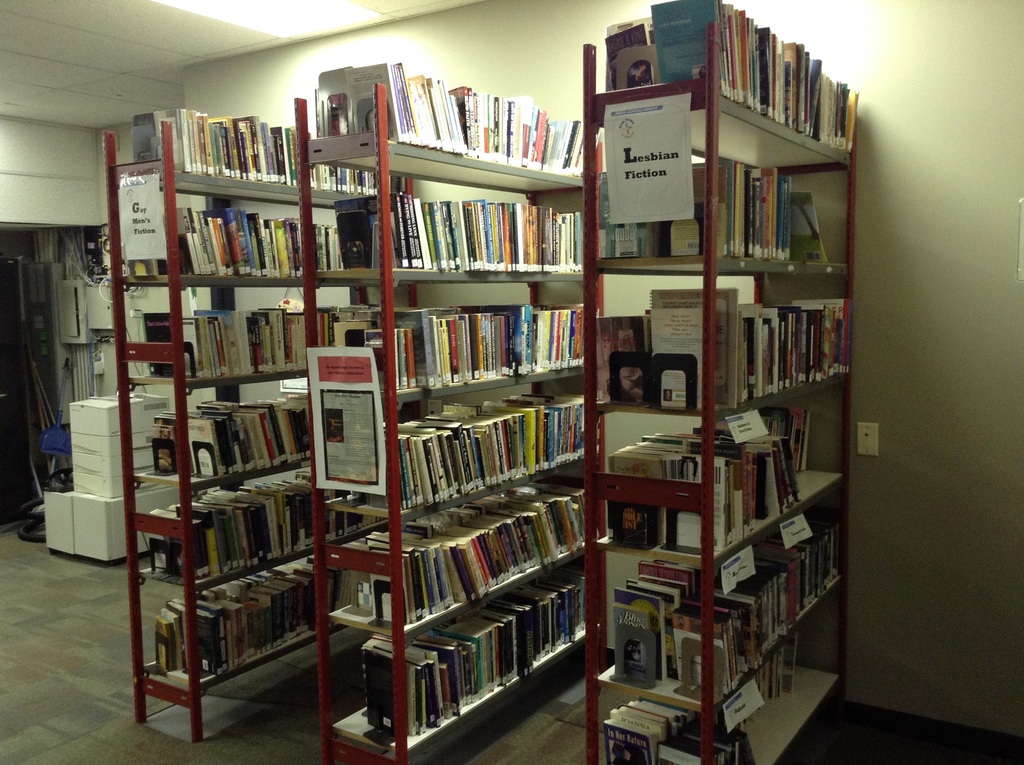 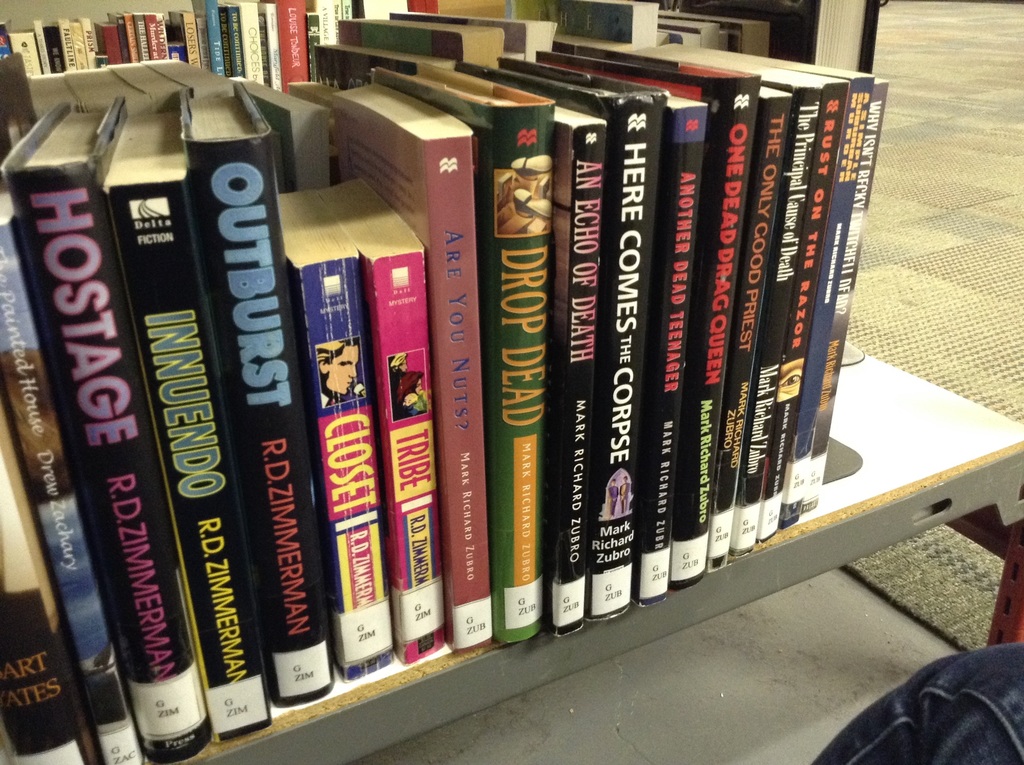 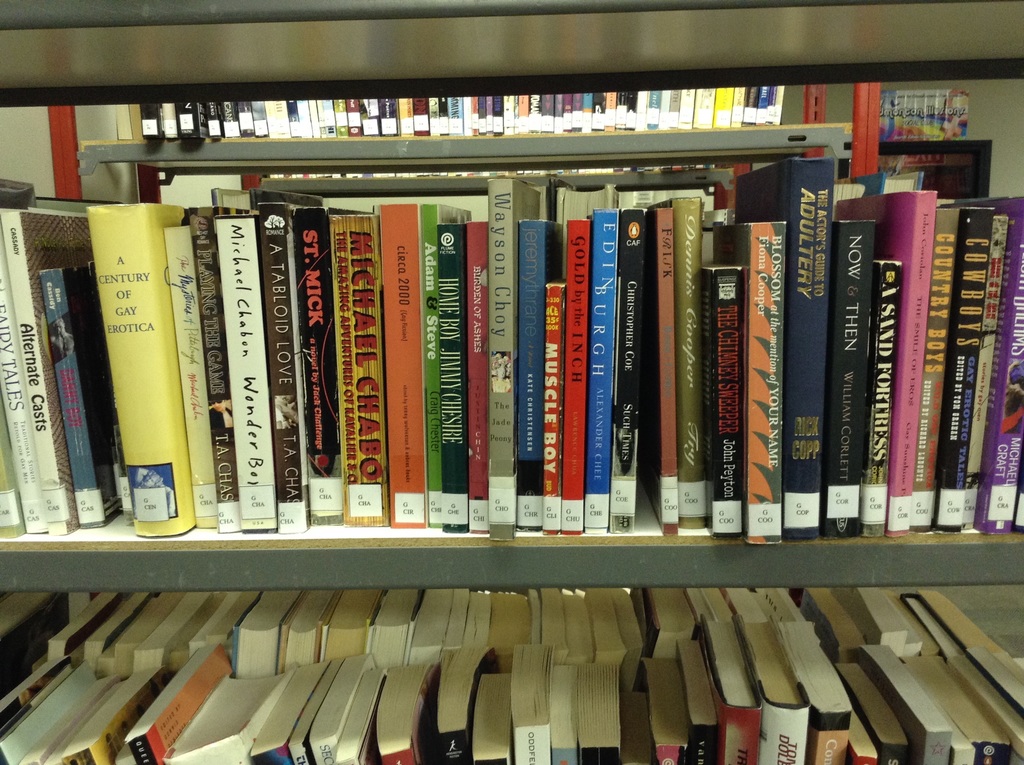 The right side of the room is bordered by shelves of mostly nonfiction, sorted into subject categories such as religion, philosophy, social sciences, and a collection of LGBTQ periodicals. These are particularly interesting because, unlike many of the books the library owns, LGBTQ magazines are notably missing in the public library system. While providing materials for the LGBTQ community that cannot be accessed easily elsewhere, the Pride Centre is also helping other library systems progressively assess their own collections. Staff members are currently working with Leduc County Library on a consulting basis to help them update their offerings by suggesting books to purchase. 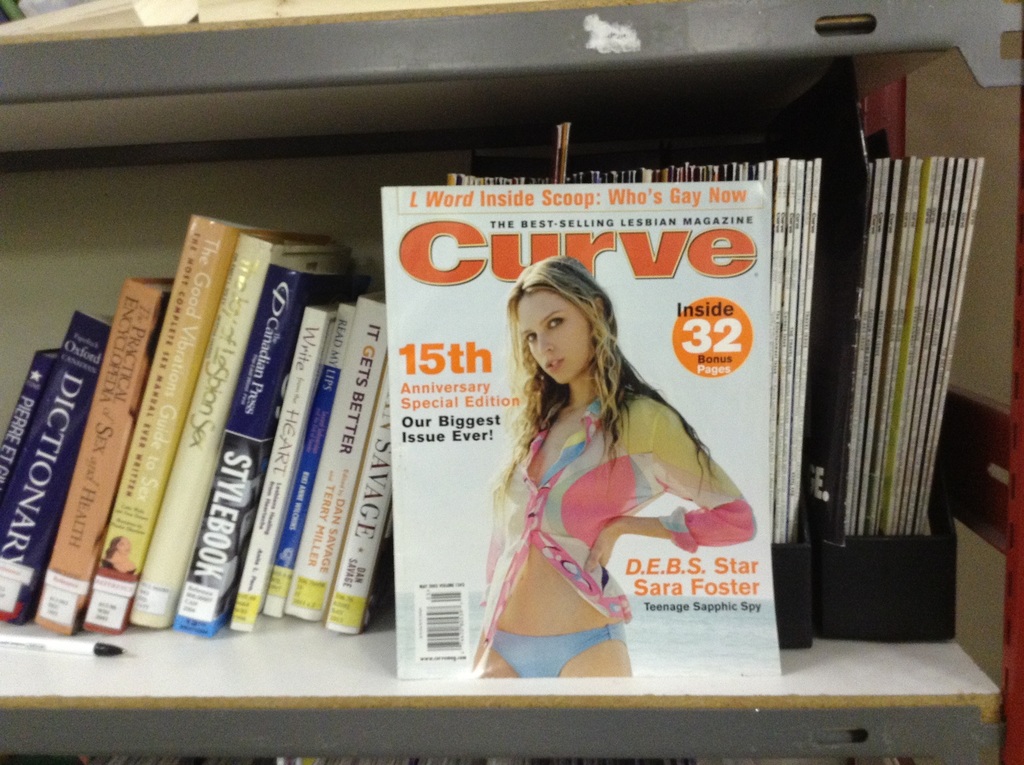 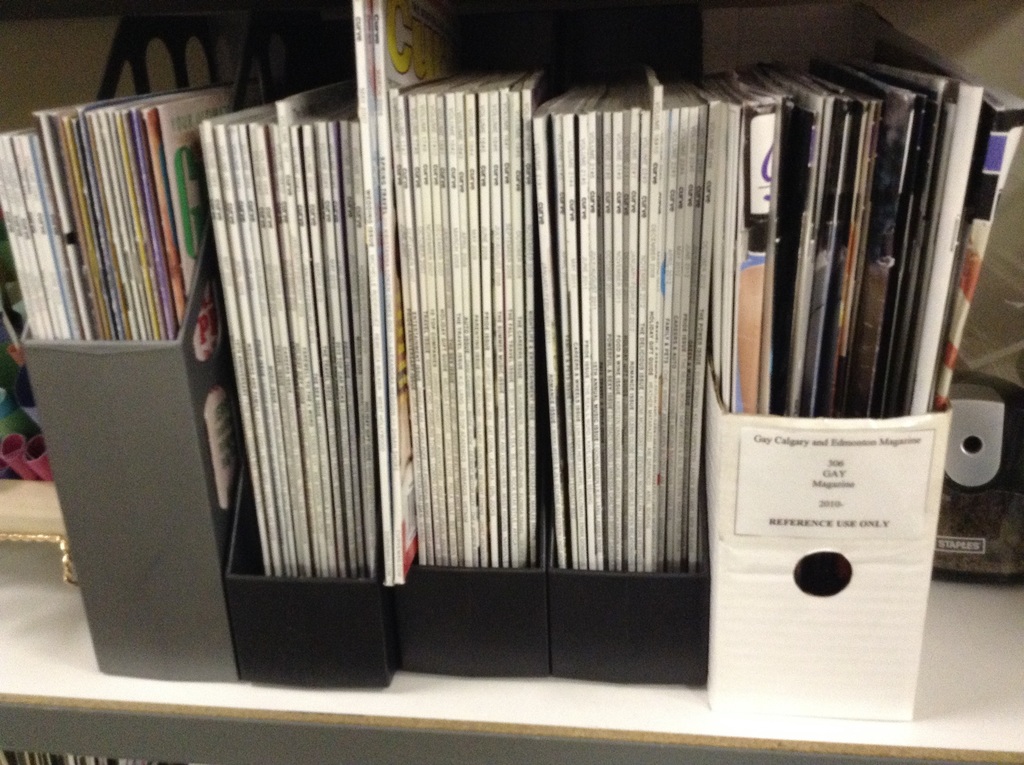 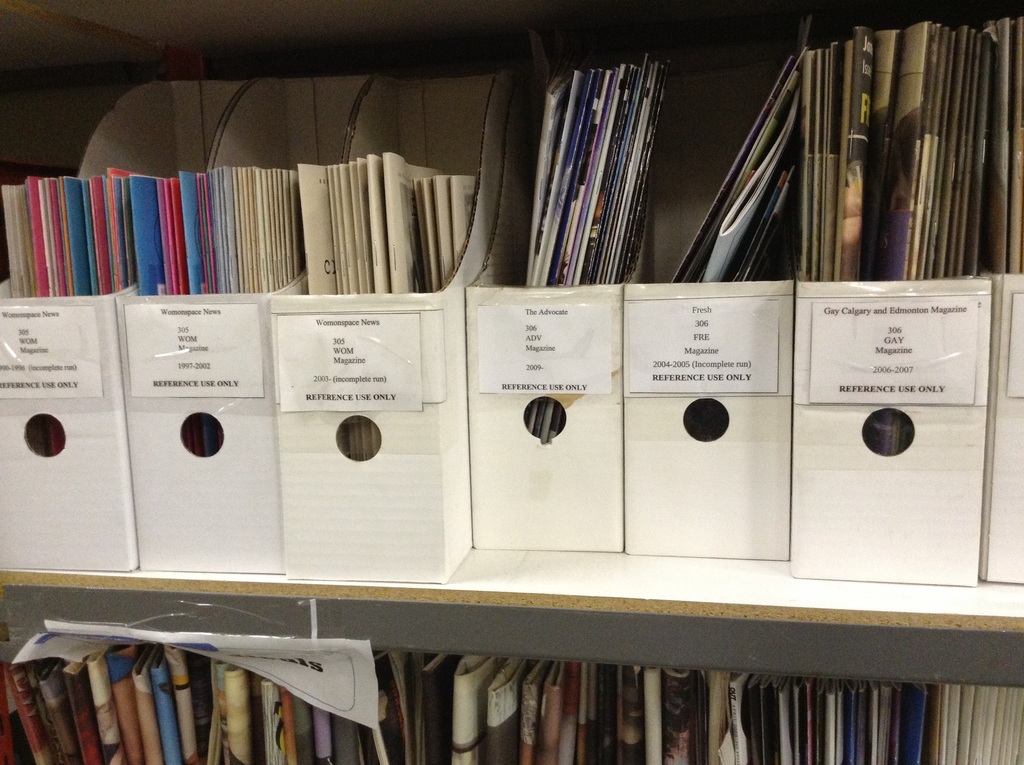 While the library at the Pride Centre is not set up for casual reading–there are no comfortable chairs or couches to lounge on–it is a well accessed space. The room is regularly booked in advance for Pride Centre events and meeting groups. Members often come to jam at the library with provided instruments, and the centre hosts board game nights and yoga classes in the space. More than books and reading, the library offers community.