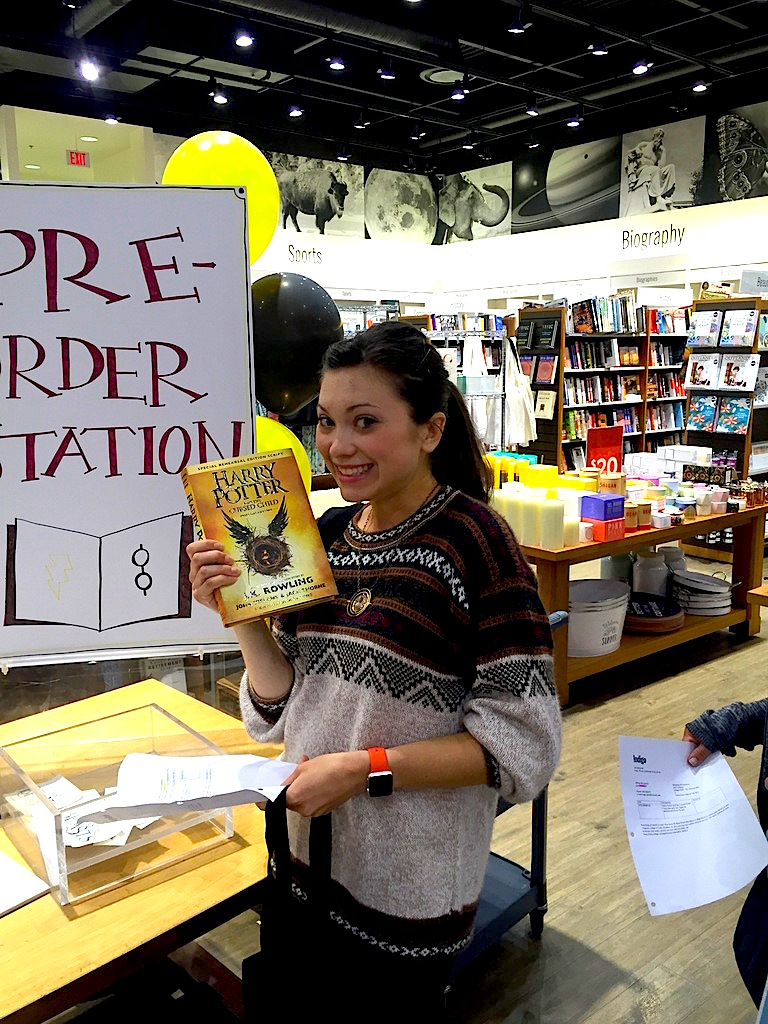 Many of us have grown up with the stories of Harry Potter displayed on our shelves and entrenched in our souls. When the seventh book came to a bittersweet close with a nineteen year later epilogue, we thought we had seen the last of our beloved heroes and heroines. However, to the delight of fans everywhere, J.K. Rowling has finally returned to the stage for her long awaited encore. Quite literally, “Harry Potter and The Cursed Child” is a play and the book is the script. The play premiered on July 30th at the Palace Theatre in London. 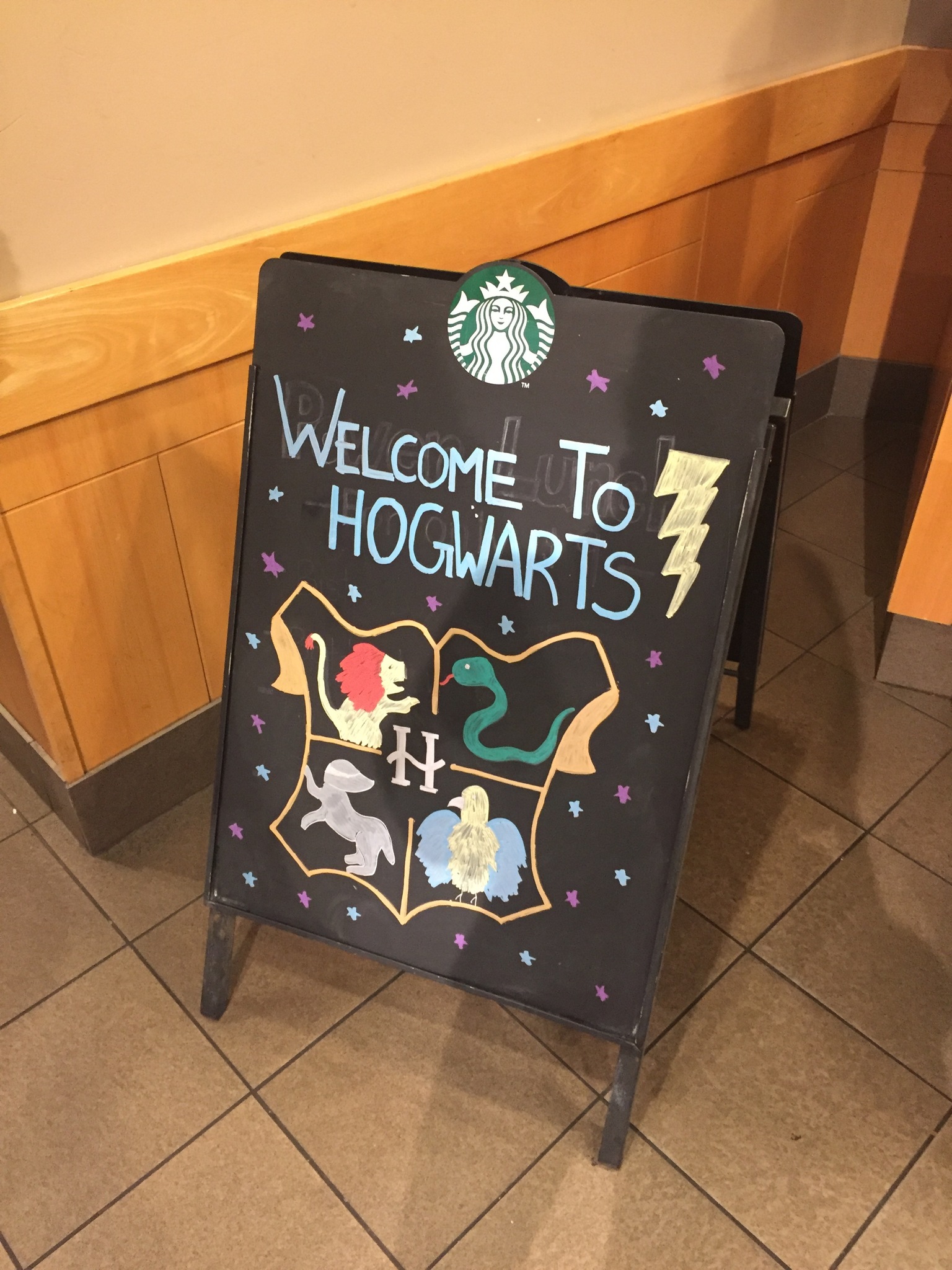 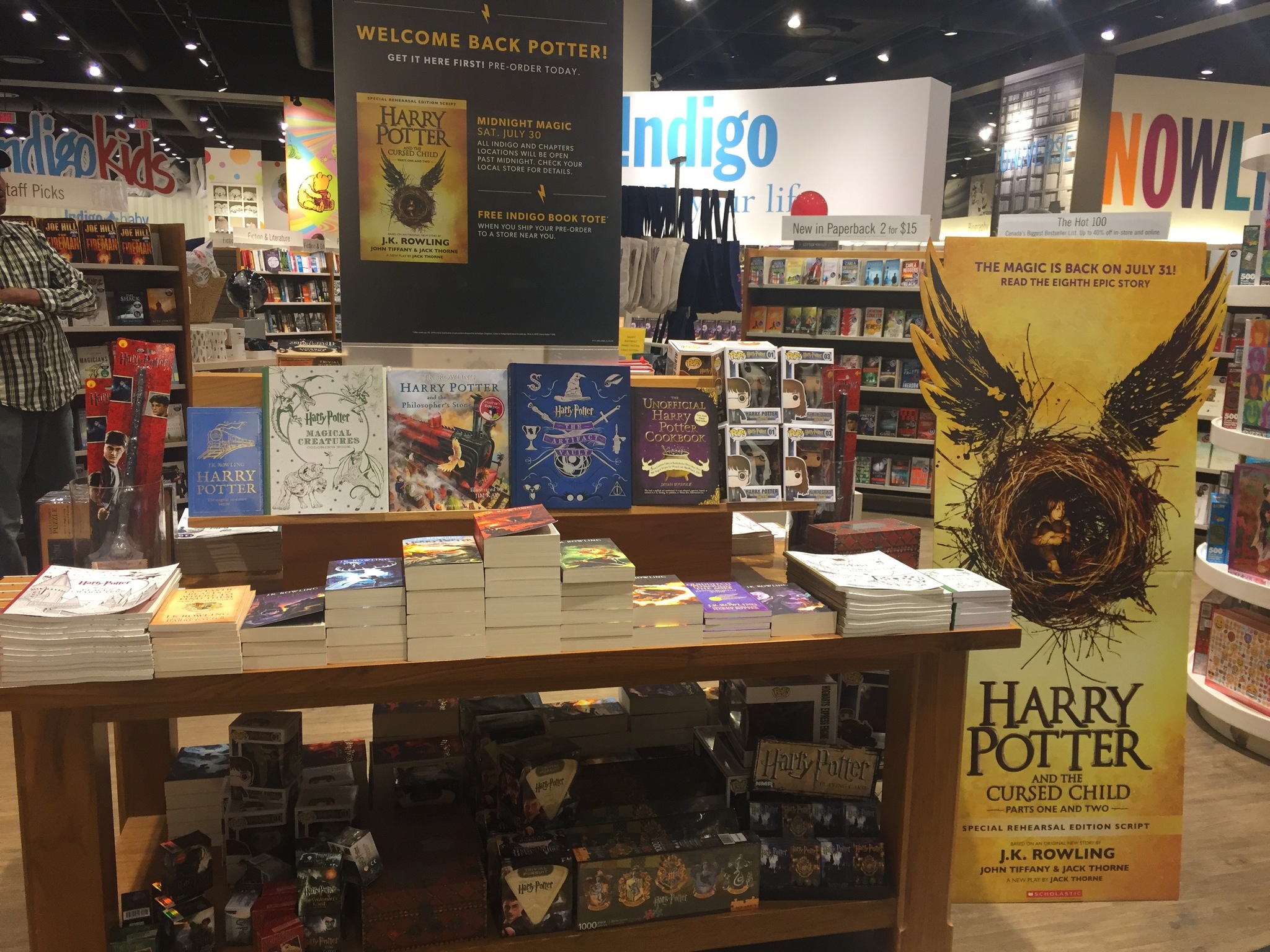 Coming from the perspective of an English Major with some background in drama, a script is hardly an intimidating format. However, it seems that for readers more accustomed to the traditional novel medium, this latest release was met with mixed views. But that didn’t stop a flood of “Potterheads” from eagerly filing into their local Indigo and Chapters for “Midnight Magic,” an event hosted by participating locations on the night of July 30th honouring the book release, and of course, Harry Potter’s Birthday at midnight. The event ran from 10 pm until after midnight, when the books were officially available for purchase and pre-order pick up. 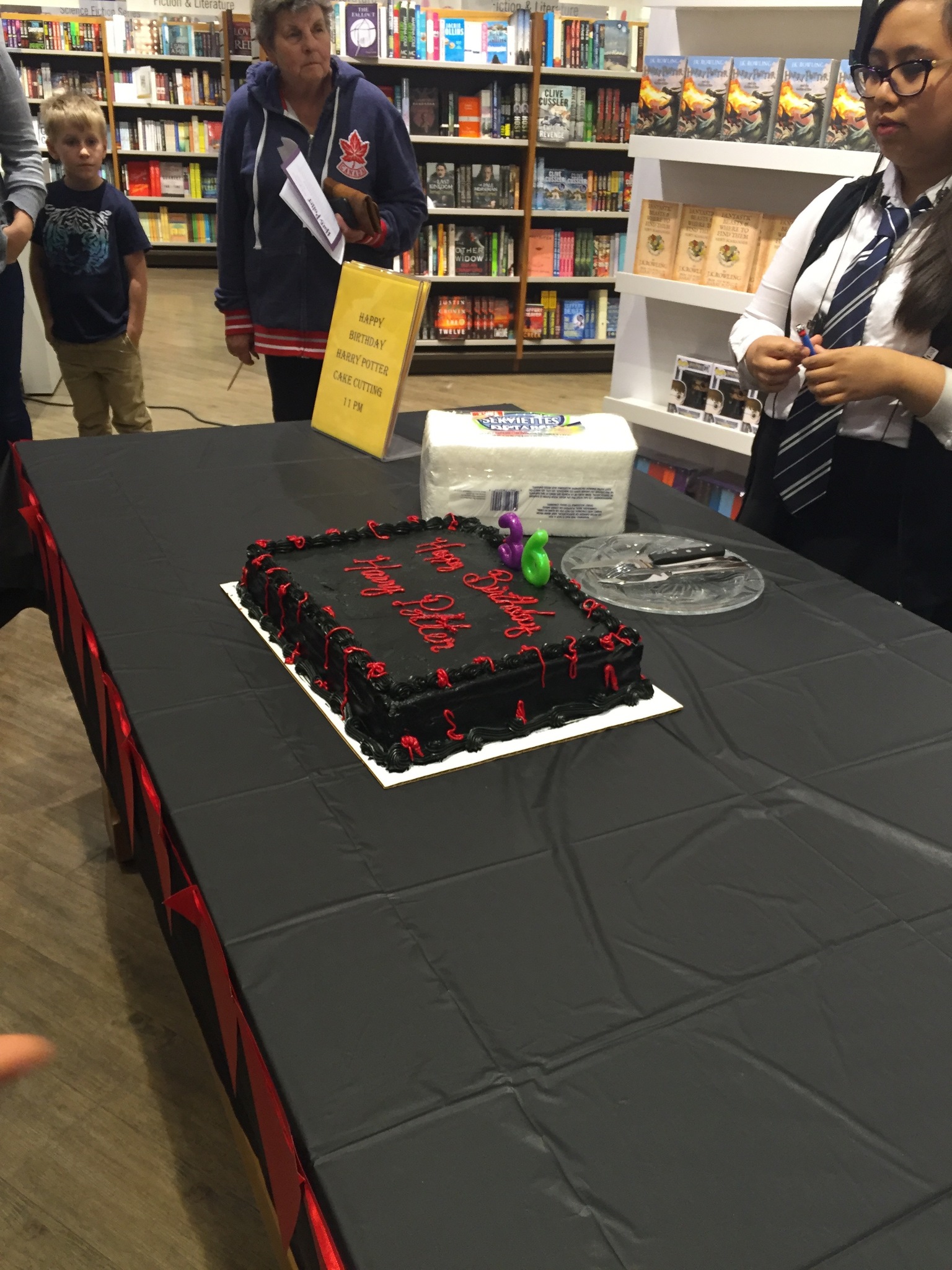 I attended the event hosted by Indigo Northtown location with my family to pick up my own copy of “The Cursed Child” and enjoy a night of wizardly fun. We kicked off the night with the sorting hat station where a short personality quiz determined which Hogwart’s house you would belong to. Once sorted, the objective of the night was to accumulate points for your team by answering Potter Trivia questions. As a bit of incentive, the team with the most points got to line up first for their books! 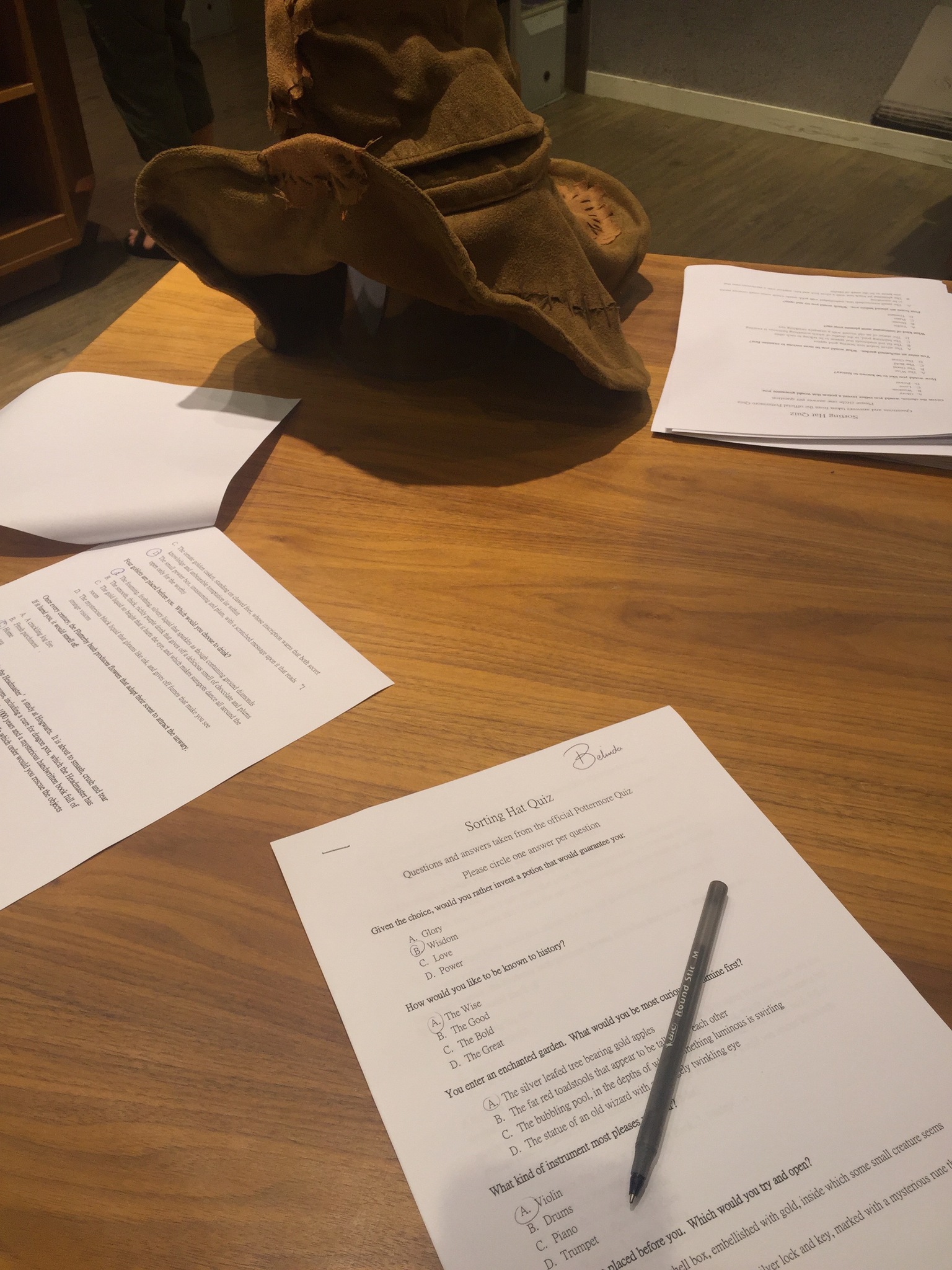 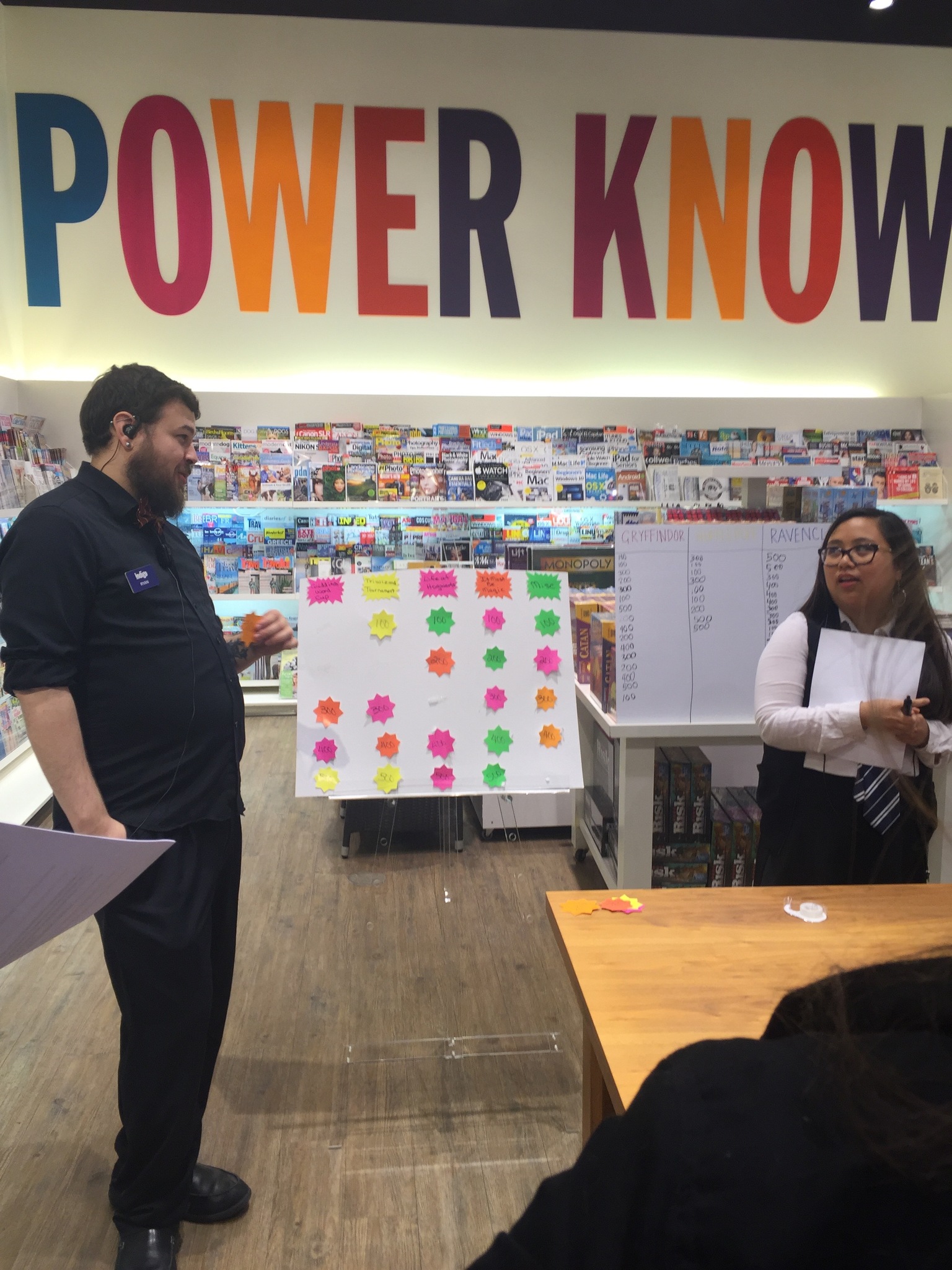 All ages were welcome and activities ranged from crossword puzzles and maze worksheets, to colouring pages, to Harry Potter inspired Starbucks drinks like Butter Beer Frappuccinos. Many fans showed their devotion to the series by arriving in costume (I myself rocked a time-turner necklace and an old knit sweater a la the Weasley family). 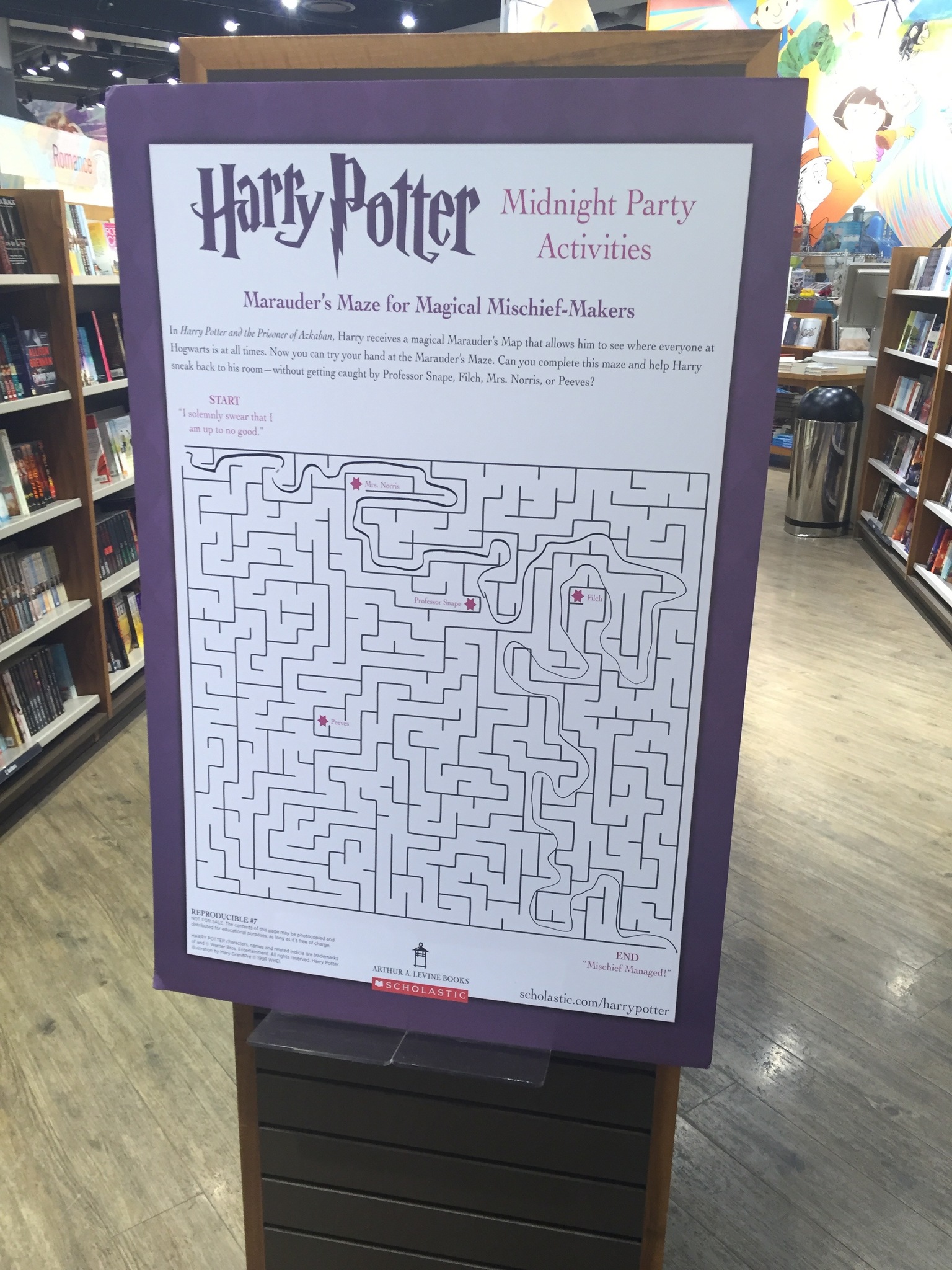 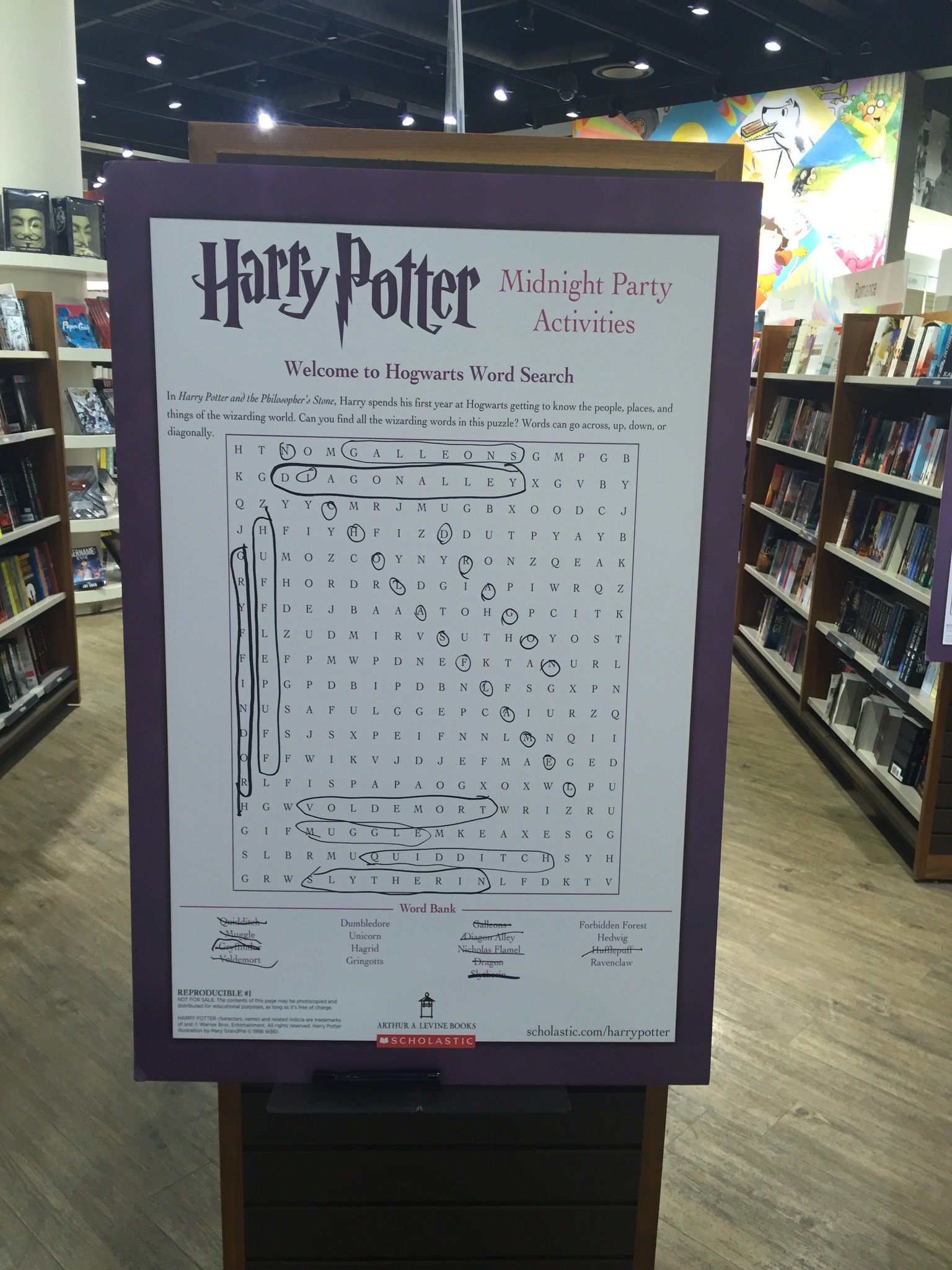 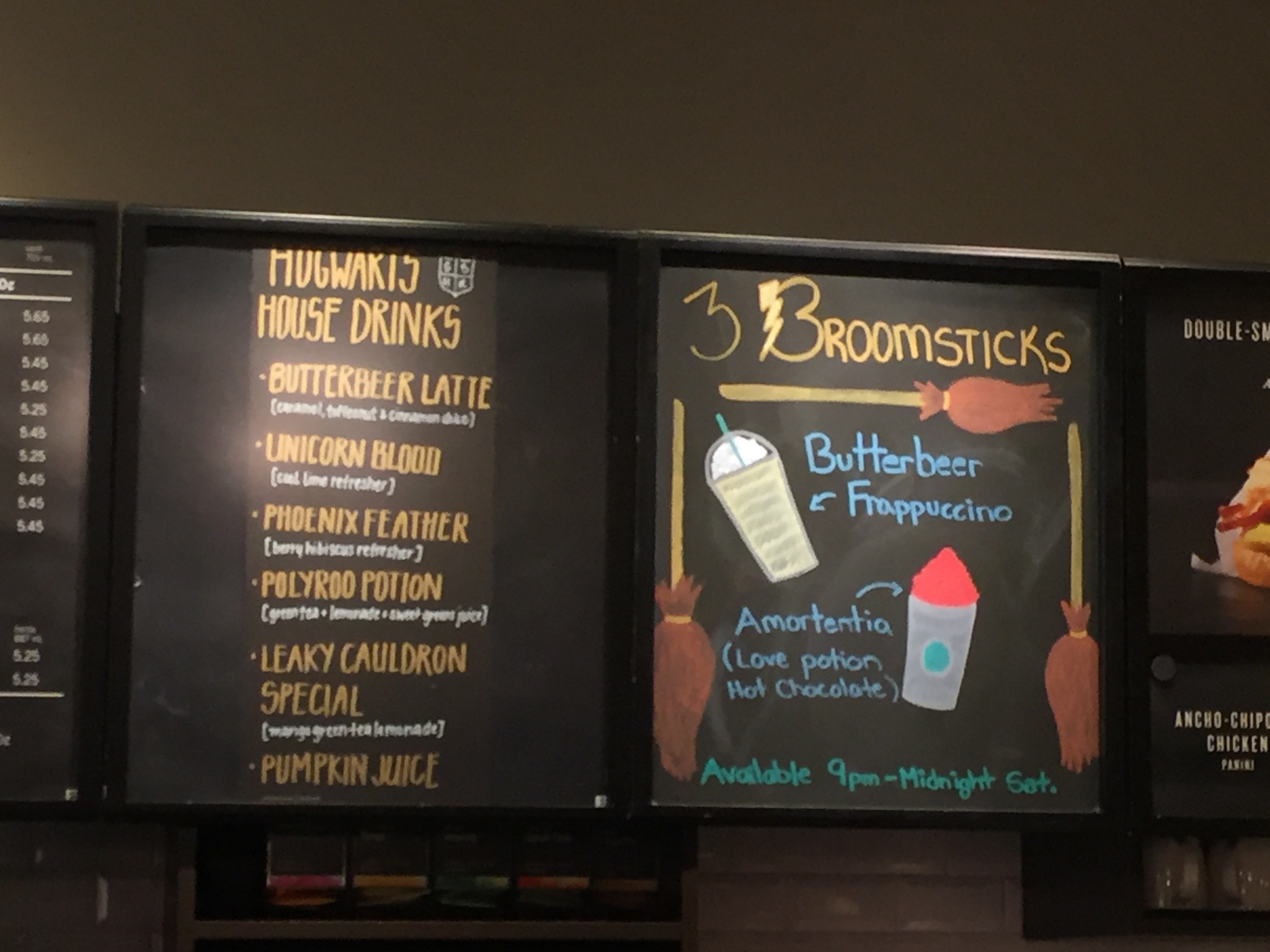 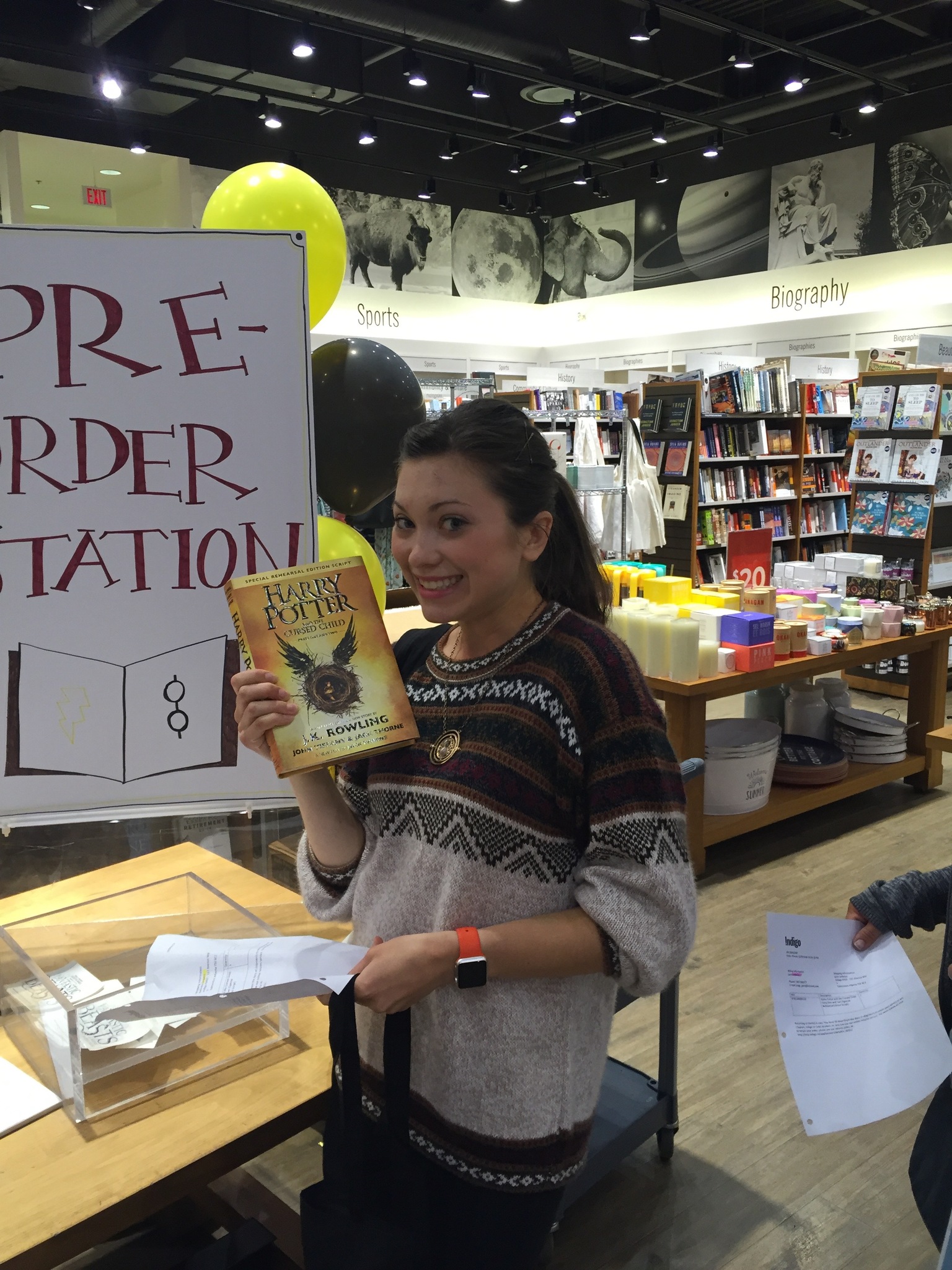 My favourite feature of this event, given my interest in how books shape the lives of their readers, was a large blank poster on the wall that read, “What does Harry Potter mean to you?” I deduced a few general trends from the array of comments written there. For several attendees, the world of Harry Potter was a much-needed escape from the real world. 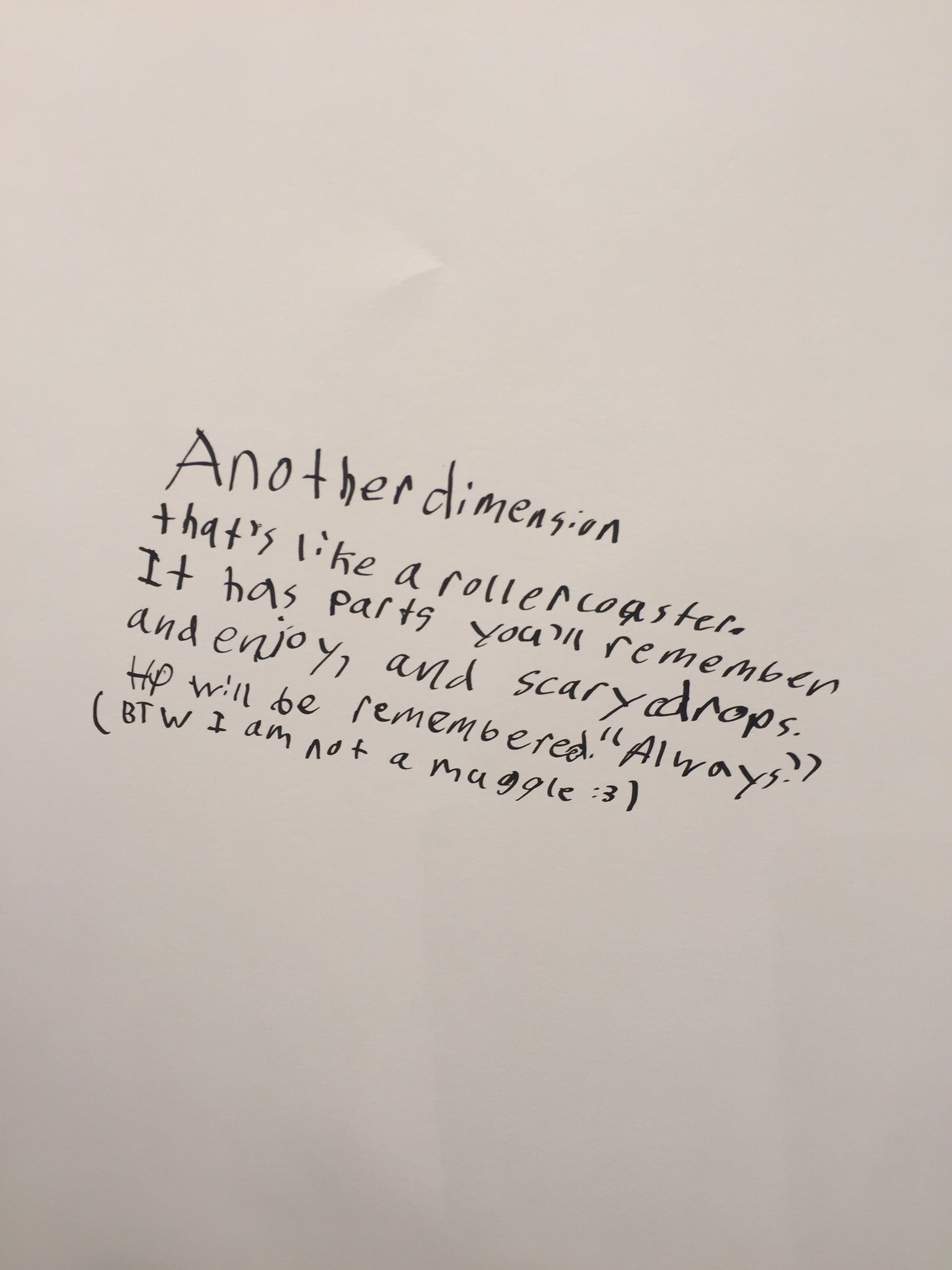 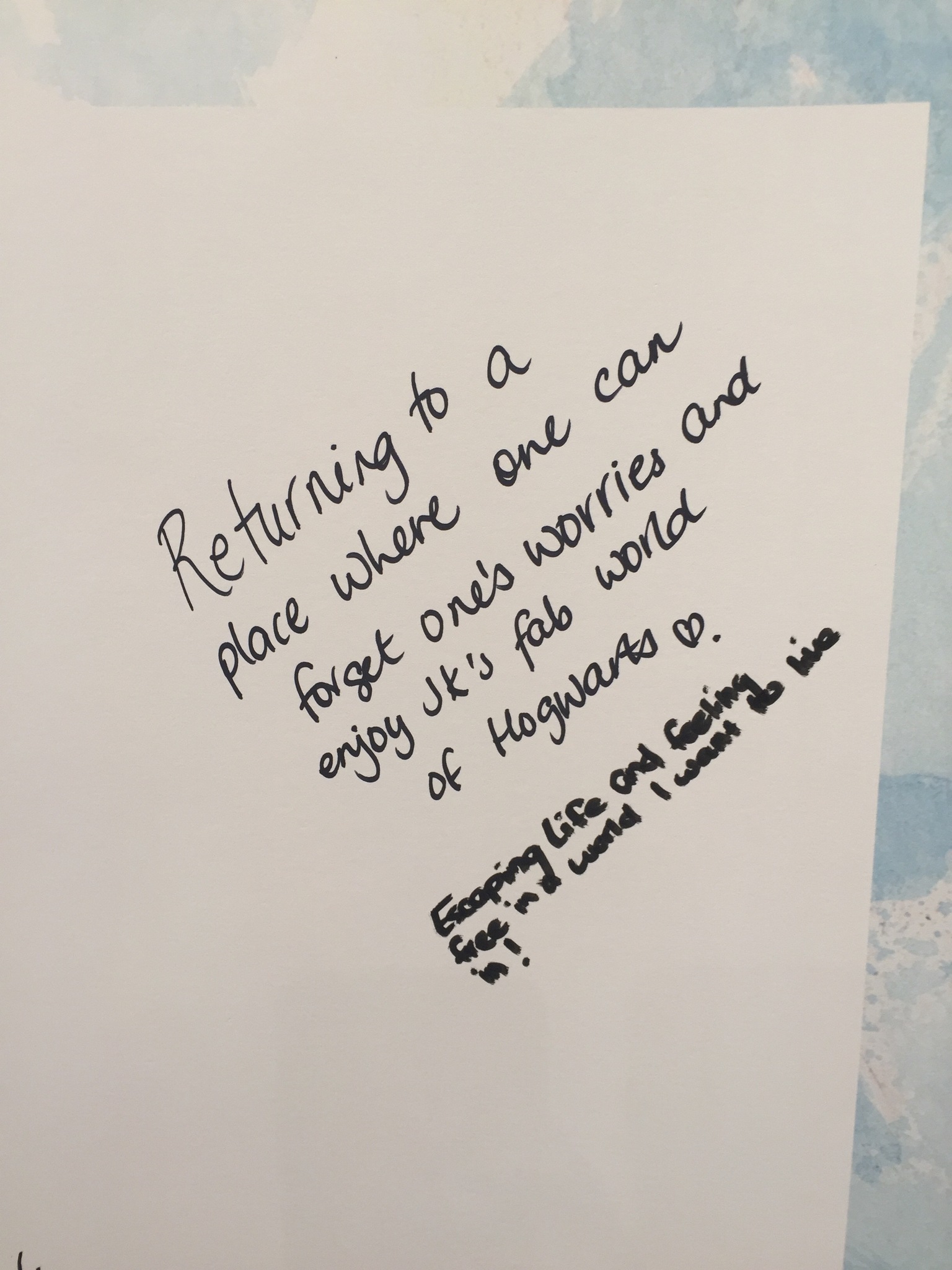 For others, the experience of reading and rereading their favorite series with a cup of tea in hand was one of pure contentment. 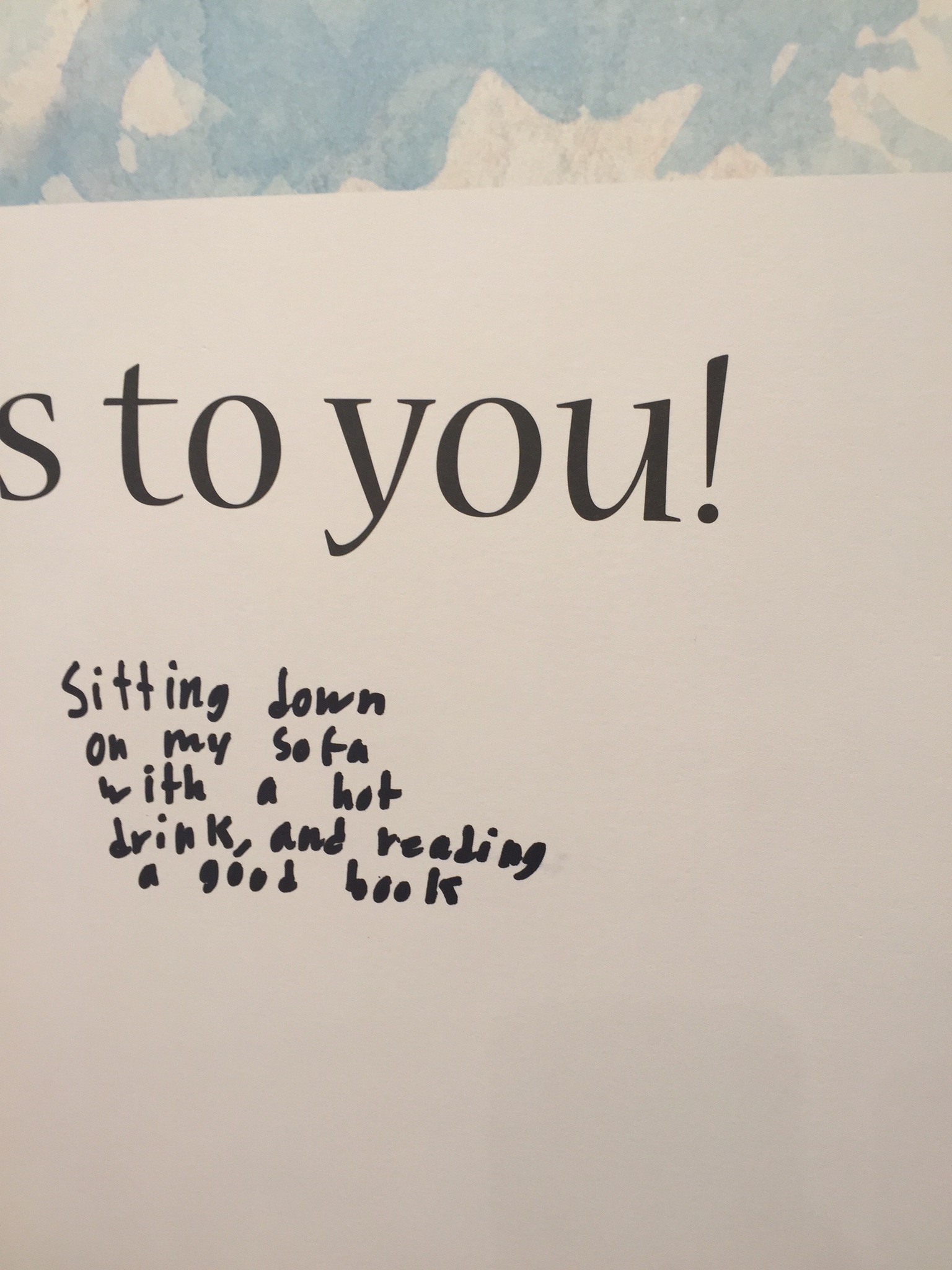 Finally, others remarked on the philosophical influence of Rowling’s stories, citing various lessons and values they had vicariously acquired over the years. 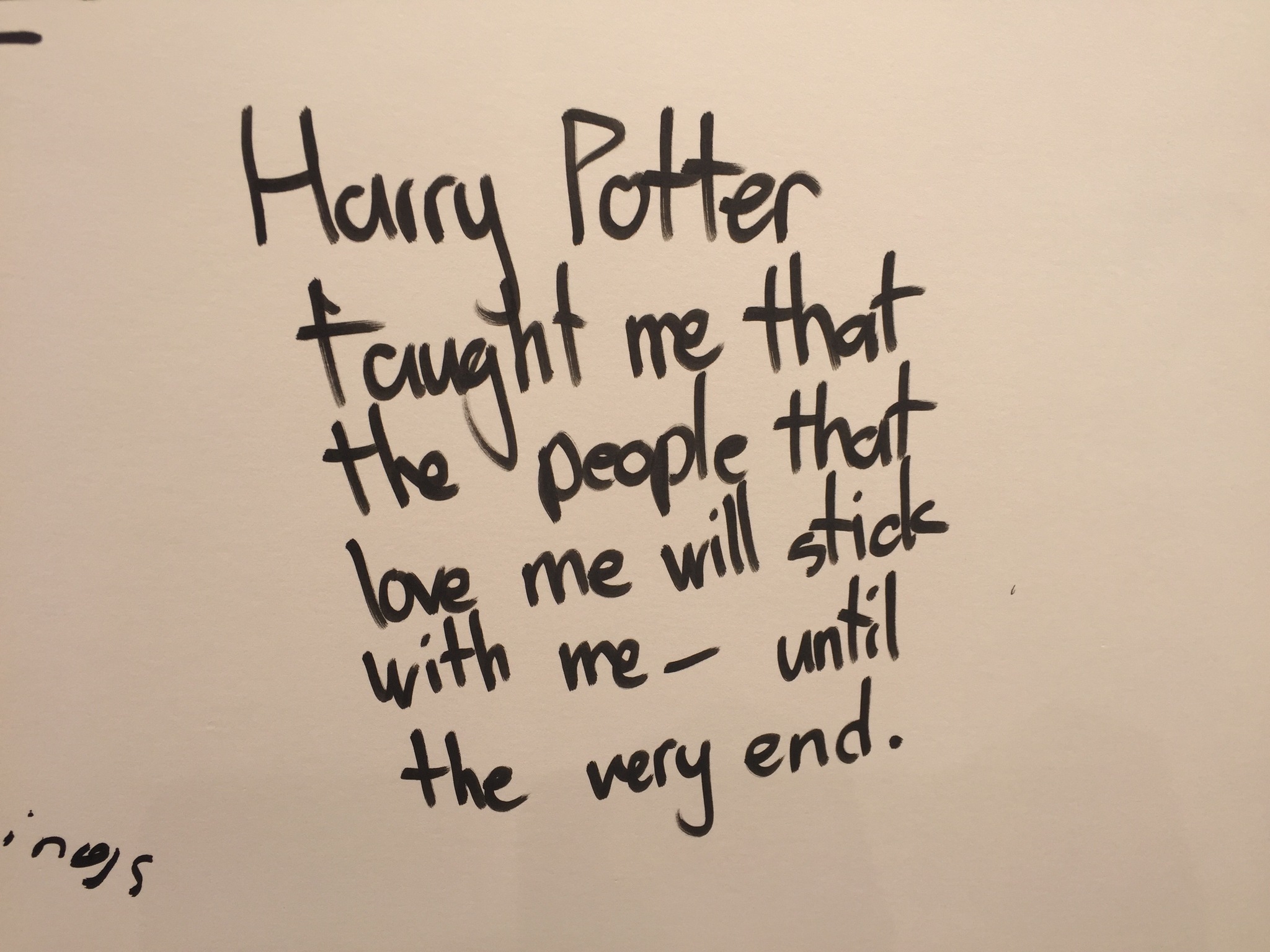 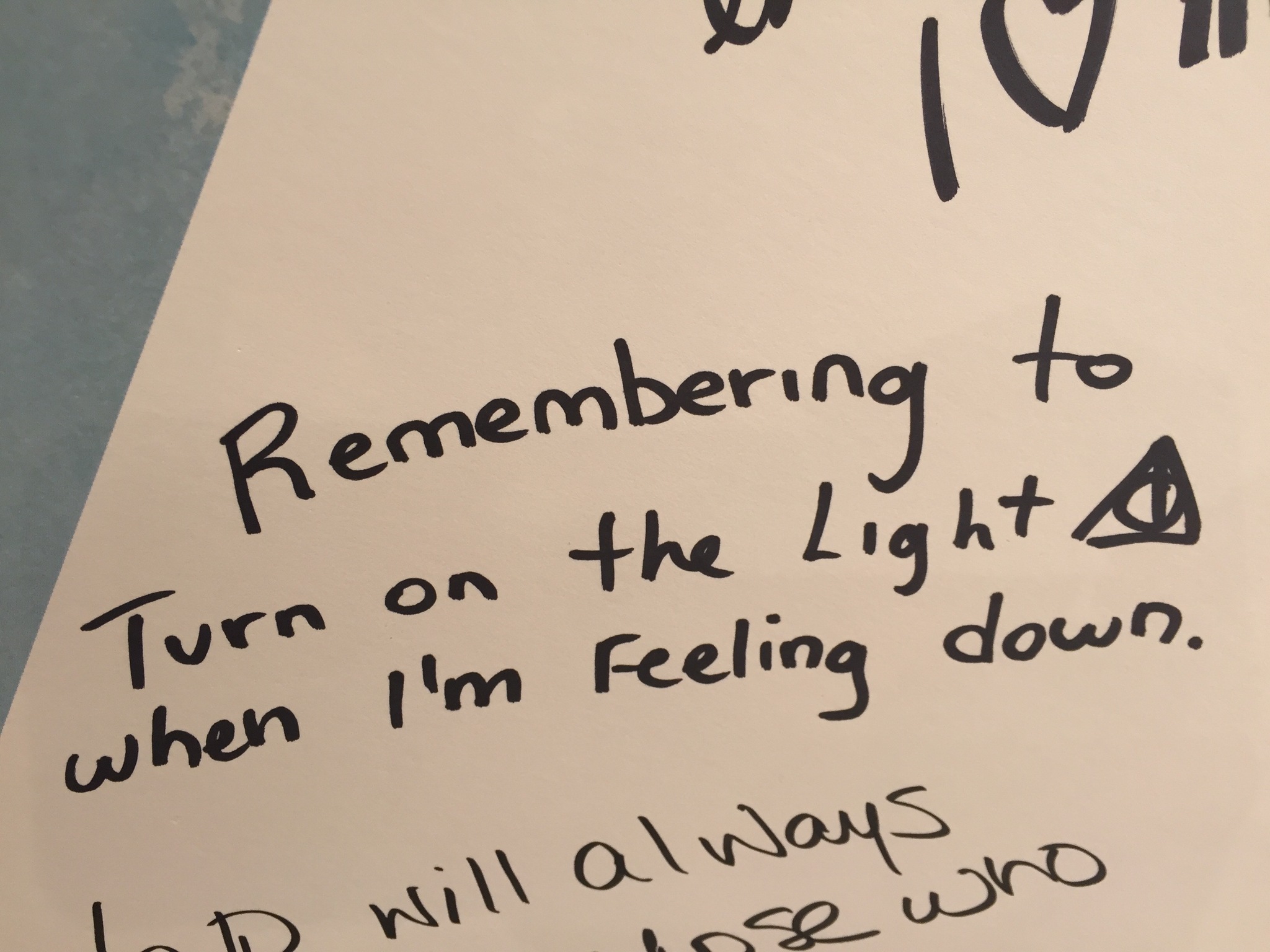 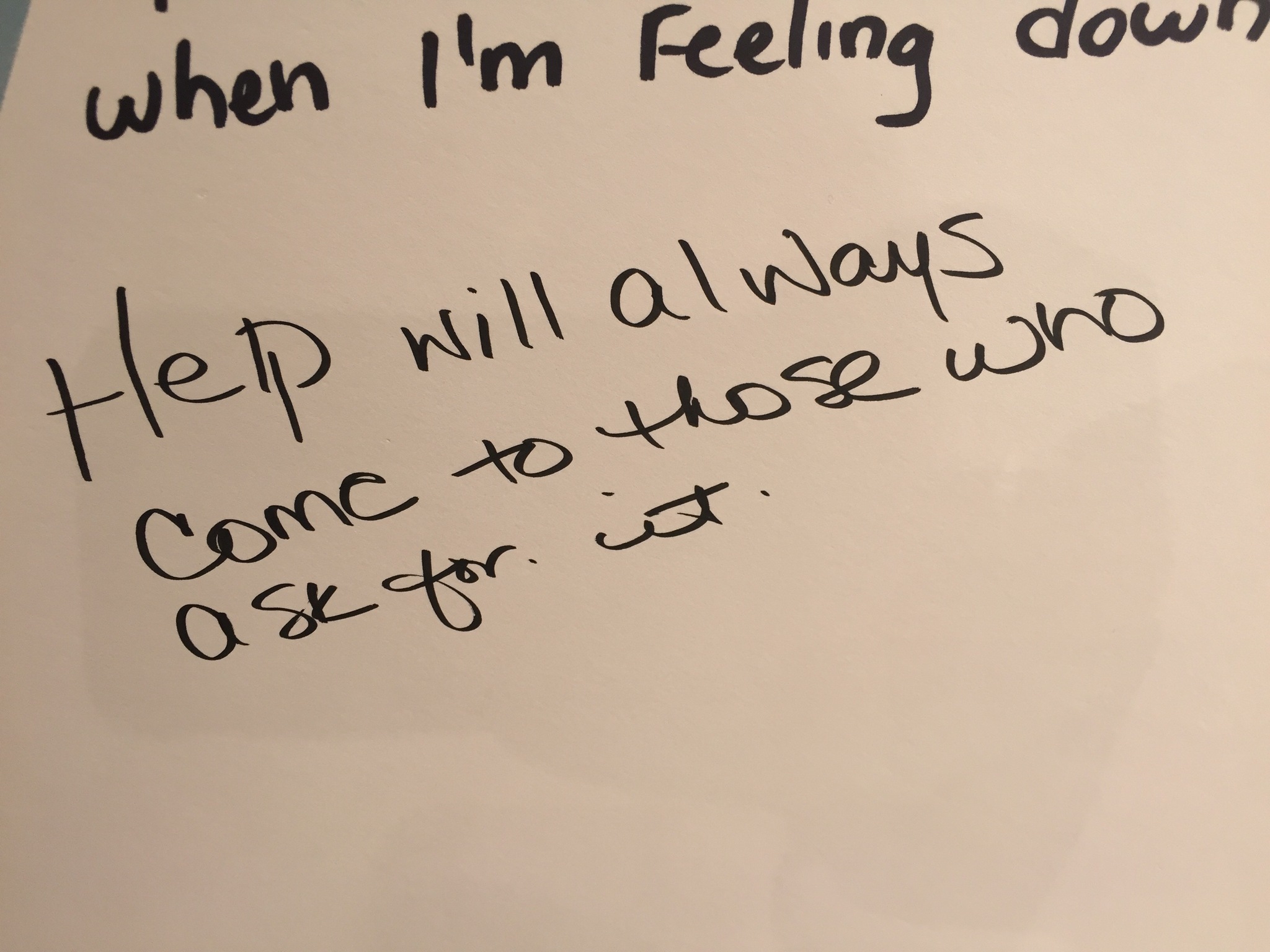 From my experience, and based on the number of families that attended the event, it was clear to me that Harry Potter is about more than an individual’s connection to the words; it’s an interpersonal and dynamic part of the reader’s lives. That said, I was pleased to find that “The Cursed Child” was rich with themes pertinent to familial relationships as well.

Before the evening came to a close, I spoke to a couple of employees, Jasmine and Karen, who helped host the event. I would just like to point out that I did not plan for their collective initials to be J.K., but I’m deeply satisfied with it nonetheless.

I started off the interviews by inquiring about what their favourite Harry Potter book in the series was. Interestingly they both shared my view that the third book was the best. I’m sure we were all equally thrilled to discover that the time-turning action of “The Prisoner of Azkaban” makes a huge come back in the latest book.

When I asked about when the books came into their lives, Jasmine suggested that she had been around 11 or 12. “I think that’s how it was for a lot of people,” said Jasmine, who went on to note that Harry Potter was the same age at the beginning of the series and it made sense that readers of a common age bracket could relate in some ways.

I was also curious about how they felt regarding the unique format of the latest book. Karen suggested that although there seems to be less excitement surrounding the release, she was still going to get her own copy. She also noted that, “people are a little nervous about the new format.” Jasmine shared that she was looking forward to seeing the play during her upcoming trip to London; she acknowledged that while the books and movies don’t perfectly coincide, she knew that what she was going to see on stage would directly parallel the print.

I asked Karen and Jasmine what Harry Potter meant to them. For Karen, it was all about nostalgia. Surely, this holds true for many fans. I myself still get chills every time I hear the classic Harry Potter Music at the start of the films. “I think it was definitely my introduction to fantasy,” shared Jasmine, “and on a bigger scale, reading… and now I work at a bookstore!”

Sometimes we look back on the books we read as children with mild embarrassment or complete dismissal, but clearly this has not been the case for Harry Potter fans whose love for the series has endured well into adulthood. Whether readers read the books first, or saw the movies, we can almost all agree that we won’t be forgetting the impact of the stories anytime soon.

I concluded the interviews by asking why they thought the Harry Potter series had continued to be such a huge phenomenon over the years. Karen insightfully suggested, “it’s perhaps the world that it was in – it’s very easy for people to insert themselves into the world of Harry Potter, to relate to a house, and I think that’s the main appeal.” Jasmine offered, “I think it’s because it’s really well written and it touches on a lot of topics like growing up and even beyond that - and you grow up with the books!” She added, “I think it will be relevant for a really long time; it’s probably going to be a classic.”

By the end of the night I knew that the evening was about more than a single book; it was about a shared experience of our youth and adulthood, about the lessons learned and the values internalized, the families brought together by shared love for the stories, and the enduring quality of a series that all started with that young lad in the cupboard under the stairs – the boy who lived: the legacy that will keep on living. 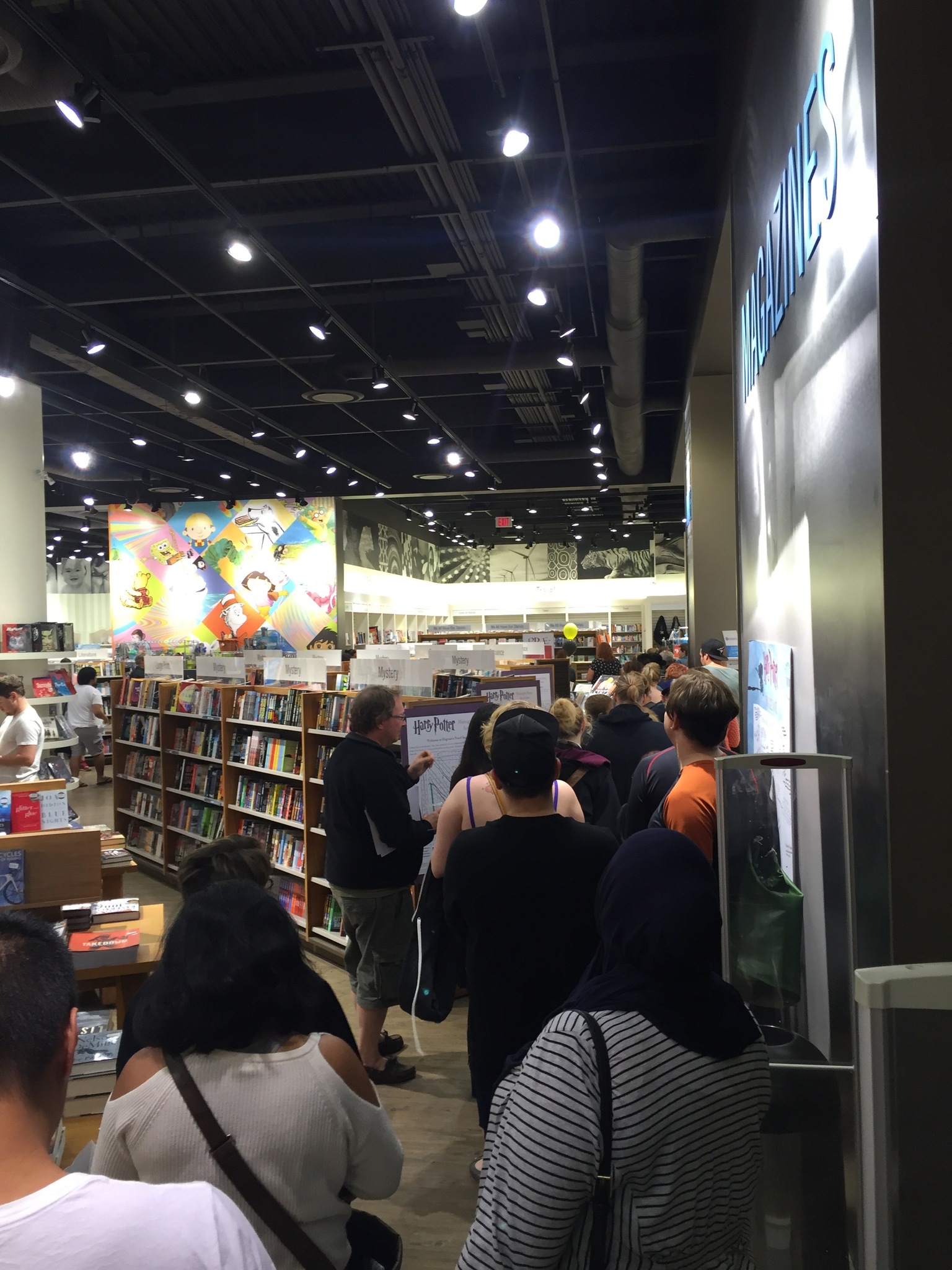