Entering a bookstore, you first notice the books. They’re front and center. Perhaps you note how they’re arranged or how one set of shelves differs from the rest. But before you continue these thoughts, you’ve already arrived at the section you’ve been looking for. After all, the point of going into a store is to buy something.

In the spring and summer of 2015, I stopped short of buying something, and instead I let my thoughts and impressions about the bookstore continue: why were these shelves arranged this way? How did all of these books come to be here? Was there a special deliverer of books for each kind of store? What about smaller or bigger stores? I could clearly see the books and the shelves, but not what was behind them: the hidden world of Edmonton’s bookstores.

I set out to find answers to a very broad question: how do Edmonton bookstores get their books? I divided my research into categories: chain bookstores, nontraditional bookstores, independent bookstores, universities, associations, publishers, newspapers. I managed to conduct six interviews which feature industry-sized information, and I’ve sectioned this narrative accordingly. Every person I interviewed loves his or her work and how he or she contributes to Edmonton’s popular print culture.

As I continued my research, it became not so much a question of how Edmonton bookstores get their books, but rather one about who is responsible for the stores having books. In the hidden world of Edmonton’s bookstore there are owners, operators, and leaders of the industry who facilitate the complex communication circuits formed between publishers, printers, and distributors, but who are also just readers and lovers of books, the same as you and I.

This research on Book Networks primarily focuses on the distribution networks, allowing the production and travel of print material to Edmonton possible. Besides a small amount of basic internet research about the history of the book industry in Canada, the majority of my research has been based on my own observations and reports from workers and managers in the bookstores and distributors I contacted.

We’ve seen how the establishment of Chapters/Indigo in Alberta, facilitated by their own large-scale distribution center, may not represent exactly what is popularly read in Edmonton, but still controls a large portion of what is available. We’ve seen how Audreys Books, Edmonton’s independent book seller, receives and sells books from multiple independent publishers through a single small-scale distribution company in ever-tighter competition with big book industry mergers. And we’ve seen how Walmart, in tandem with a multinational distribution company, sells their print products in singular format for all of their stores.

Popular reading in Edmonton consists largely of non-Edmontonian reading material. For all of the books that get distributed through Chapters/Indigo, Audreys, or Walmart, almost none are made in or about Edmonton; the book printers their suppliers use are from Manitoba (Friesens), the binders are from Saskatchewan (Houghton Boston, Universal Bindery), and the major distributors are from Ontario (George Terminal Warehouse, Lit. Dist. Co., Chapters) and America. While it is true that what is sold does not determine what is read, these bookstores continue to thrive, showing the multinational, multi-informational reading communities flourish within these large chain and smaller independent stores in Edmonton and the surrounding area. 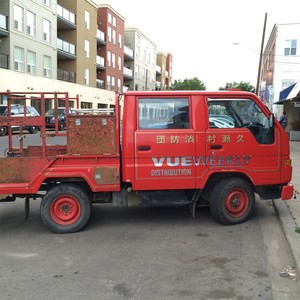 Entering a bookstore, you first notice the books. They’re front and center. Perhaps you note how they’re arranged or how...